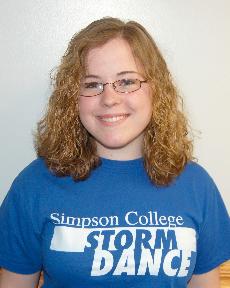 Of the many different faces on Simpson campus, a new one may have caught your eye. Emily Machen started at Simpson last semester as the assistant professor of history. Machen, originally from Dexter, Missouri, received her Ph.D. at the University of Mississippi and spent the last two years in France doing research.

“All the archives (for my research) were in France, so I had to move there,” Machen said. “I lived only a couple of blocks from the Eiffel Tower. There wasn’t anything that I disliked about France, but my favorite part was my friends.”

“As an undergraduate, the study of history provided an opportunity for me to move beyond my limited experiences in rural Missouri to develop a better understanding about how the world worked,” Machen said. “Certain key historical moments like the women’s suffrage movement or Winston Churchill’s, ‘Iron Curtain’ speech conveyed the excitement and dynamism of past eras. They also encouraged me to reflect on the connections between the past and the present. To think about what historical factors had created the world in which I lived.”

Though Machen was in France for the past two years, her past has made the transition easier.

“I’m from a small town in Missouri, so it was easy to come back here,” Machen said.

Machen came to Simpson College because the position Simpson needed in the Department of History fit her area of expertise.

“I’ve learned how much I really enjoy teaching and working with students,” Machen said. “The faculty have been really great to work with too.”