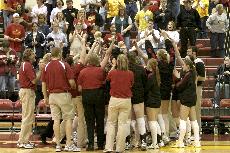 The Simpson College volleyball team finished a successful season both on the court and in the classroom this past year. The Storm Volleyball team received a 2005-2006 Game Plan American Volleyball Coaches Association Team Academic Award for its achievements.

“This award exemplifies the true Division III athlete,” said Head Coach Lana Smith. “We want to see our students excel equally in academics and on the court.”

The award is given to teams that display success both on and off the court.

Members of the volleyball team have dedicated their time at Simpson to receiving a good education as well as being part of a successful athletic program, and that hard work has paid off.

Smith has always held her players to high academic standards and encourages them to use all of the resources that Simpson has to offer.

“We definitely encourage even our ‘A’ students to use Hawley Academic Resource Center,” Smith said. “Instead of settling for a ‘B,’ our students can use the resources offered to get an ‘A.’ That’s the beauty in coming to a school our size.”

Smith feels that this award shows what the Division III athlete is all about.

The Storm played a full season in just 11 weeks, which meant the women had to miss class several times due to travel.

Senior Jessica Martin has experienced the pressure of missing classes for volleyball.

“It is hard because I miss a lot of class, but the professors are understanding,” Martin said. “As long as I get all of my work done, everything is fine.”

Being a student-athlete has taught the volleyball team about time management.

Sophomore Lisa Fiene feels the busier she is, the more organized she becomes.

“Overall, I’m more focused during season,” Fiene said. “I have learned to adjust my schedule. I tend to have a lot better time management when I am in season.”

Martin has learned how to balance her academics with volleyball after completing four seasons with the Storm.

“I use a planner to stay organized so I know what assignments to get done,” Martin said. “I devote a lot of my time after practice to getting my school work done.”

Along with all of these academic honors, the Storm had a successful season on the court. The women won their first Iowa Intercollegiate Athletic Conference Championship since 1994 and finished with a 6-2 conference record. The team also advanced to the second round of the national tournament.