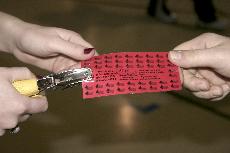 The athletic programs at Simpson College hope to see increased athletic support as a result of the new storm card program. The Student Athlete Advisory Council recently released this new project in order to boost fan support for the spring athletics.

Last spring and this past fall, some members of SAAC attended Opportunities for Women in Athletic Symposium, where they developed the idea for the card in a brain storming session about how to increase attendance at athletic events. Junior Martha Davis was one of the women who attended the symposium and said it has been a big time commitment working on this project.

“It’s a lot of work just planning this,” Davis said. “Sometimes you just don’t know how much work is involved.”

The symposium was intended to encourage women to pursue careers in coaching. The NCAA gave grant money to the different schools and the Storm put it toward developing the Storm cards. The official Web site for the cards said their main goal is to “bring an extended level of student support for our athletes.”

As a student-athlete, junior Brady Buresh wants to display his enthusiasm for athletics by getting more punches than anyone this spring. Thus far Buresh has four punches and hopes to increase that number as the days go by.

“I think [the cards] are a good idea to try to get students to games,” Buresh said. “Most people would rather sit at home doing other things, but what’s two hours to support your classmates?”

Another student-athlete, sophomore Johnna Kripal, believes the cards are a good incentive for those who attend the events.

“I think they’re great,” Kripal said. “It gives the students who do support athletics a chance to win something by going to the games.”

Davis said now that the cards are up and running, it is up to the students to actually use them.

“They were a lot of work,” Davis said. “Now it’s in the hands of the students to see how far they take it.”

Davis said she wouldn’t change anything about how the program has been going thus far.

“This is the first time the Storm cards have been implemented,” Davis said. “So far everything is going great.”

Buresh said there was one thing he would change to increase the participation of the program and Kripal agreed. Both student-athletes believe telling the students what they could win might increase student involvement.

“It would be nice to know the prizes you have a chance of winning,” Kripal said.

Davis said they are unsure about whether or not this program will continue past this spring semester because they have not discussed it in their SAAC meetings yet. She also believes it is too soon to tell if the cards are actually making an impact on attendance.

“Every little bit of involvement is a step,” Davis said. “It is fun to see students excited about it.”

Buresh is one of those excited students. He also said it is too soon to tell if the cards are having an impact on attendance.

“Hopefully, in the long run it will help,” Buresh said. “But right now it’s hard to tell because it just started.”

The Storm cards are available through all student-athletes and coaches, and there is a sign-up sheet in the athletic office by Pat Hick’s desk. Students receive one punch per game they attend and after they have finished their card, with 25 punches, they enter their card into a drawing.

Davis said some of the prizes should be pretty big, they just haven’t decided what they will be yet.