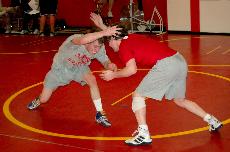 As the season’s end draws near, the Simpson wrestlers’ main focus is to qualify as many wrestlers to Nationals as they can.

“My goal is [to have] our best performances at the end of the season and get as many guys to Nationals [as we can],” Head Coach Ron Peterson said. “It will be a challenge.”

Peterson said seven of the nine teams in the conference are ranked in the top twenty in the nation.

According to Peterson, they started with 24 on the roster at the beginning of the year, but with injuries and other commitments, the lineup has thinned out.

Peterson said he has a fairly young squad this year that has taken some bumps.

“The wrestlers have a good attitude and are making improvements, so there are better days ahead,” Peterson said.

Eventually, the wrestlers will start conserving some energy as they head to the conference championships.

“Right now I’m having them do explosive drills and sprints and situational wrestling,” Peterson said. “We are just training hard and everything is quick bursts.”

According to Peterson, the wrestlers have a “never quit” attitude, as they have battled adversity and are hanging in there. He believes they do need to be more consistent with more solid performances every time.

“I think we have a great group of guys,” Peterson said. “I have put them through wars and they have worked their tails off.”

Junior Trent Byler, however, thinks the team needs to work harder than they have been in order to improve.

“In preparation for the conference championship, I am going to do lots of extra work and more running while I work with the younger wrestlers.” Byler said.

Byler has confidence in his teammates and hopes to send some wrestlers to Nationals. “All the wrestlers have good character and a lot of talent, and there is a ways to go to Nationals,” Byler said.

Sophomore teammate Garret Kiley thinks he had made progress in his first year at Simpson. He wants to continue to improve and qualify for Nationals.

According to Kiley, it has been an up and down season, but the season isn’t over and now is the time to put in extra time and effort.

“I have a list of goals to think (about) and look at and they help me to push harder to reach those goals,” Kiley said.

According to Peterson, it is important to work hard at practice in order to see positive results.

“If you work hard good things are going to happen to you,” Peterson said. “I expect the guys to represent Simpson in a first class manner.