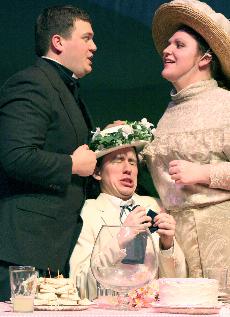 On Feb. 16-18, Simpson College’s Department of Music will be performing a production of Benjamin Britten’s “Albert Herring” under the direction of Professor of Music Robert L. Larsen.

Set in east Loxford in Great Britain during Queen Victoria’s reign, the opera has a comedic twist.

“For many years, Loxford has selected a May Queen – a woman who is a virgin and pure of heart,” junior Sara Best said. “However, this year they have a problem, no girls fit the description.”

When faced with this dilemma, the people of Loxford look to find a pure May King.

“Instead of calling off the celebration, they chose a man instead: Albert Herring, a real mama’s boy,” Best said. “After being selected as the May King, Albert realizes he really needs to get out more.”

The story picks up after Herring is selected as the May King.

“Albert Herring was chosen because he is a Green Grocer’s boy and a very good boy so he fit the description of May King,” junior Whitney Hansen said.

“This opera has very demanding roles and is very difficult musically,” Best said. “When I first found out we were doing it, I wondered if we would really be able to pull it off. Sure enough, Dr. Larsen chose a great cast. It’s a very hilarious show and will be a wonderful production.”

The operas are chosen over the summer and cast at the end of the year. Parts are assigned in early December and rehearsals begin soon after.

Larsen said he chooses his operas based on the performance levels of the students involved.

“I chose Albert Herring based on the performers we have,” Larsen said. “I wanted as many students as possible to show off their talent because we have so many wonderful performers. Everyone says you shouldn’t have preconceived ideas on who will play what part, but I usually start thinking about the parts while picking a piece, and of course, I’m always looking for a good comedy.”

This year’s opera is not unknown territory for Larsen and is one of his favorite shows.

” ‘Albert Herring’ is an opera I have done many times, and it is a personal favorite of mine because it is so musically challenging and clever, and of course Benjamin Britten is one of the best composers of his time” Larsen said.