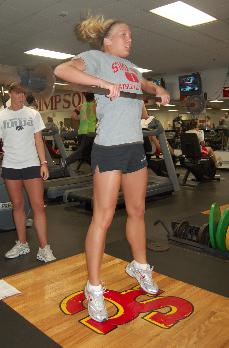 As the indoor track meets come to a close, Simpson’s track and field teams prepare for the second half of the season, which will be outdoors.

Dave Cleveland, head track and field coach, saw the IIAC Indoor Championships as the midpoint of the season. He said they will start training differently since they will be going outdoors in March.

“At this point, I just want the team to be healthy and crisp and keep their confidence up,” Cleveland said. “We are in a training phase still, since we are still getting in shape. By April and May we will be working on being explosive, strong, and flexible athletes.”

Cleveland believes the team is better outdoors than indoors, since there is not any throwing indoors.

“Indoor meets are different than outdoor, in which the track is 200 meters, half the size of the outdoor track and instead of the 100 meter run, there is the 55 meter run,” Cleveland said. “The indoor track is a small confined area with a lot of people and not a lot of room to warm up. The right turns are tight, so it’s important to have a race strategy of keeping pace and not letting the corners slow you down.”

Freshman Joe Petersen has never competed in indoor meets until this year, but he still prefers running outside.

“Outside, there aren’t as tight of corners and the outdoor tracks are just a little bit easier on runners,” Petersen said.

Senior Britta Johnson said the freshmen have basically dominated this season. They have gained more experience from the indoor meets.

“I mainly lead by example, because I’m not very vocal,” Johnson said. “I do the drill correctly and the freshmen will not see me goofing off. In preparation for meets, I usually visualize my event the night before. I concentrate on the things I can control in my race, stay focused, and have fun.”

“We aren’t a team with superstars, but we have many athletes that can contribute,” Cleveland said. “Two-thirds of the team are freshmen, so we rely on them to contribute right away. We have a great group of seniors in all track events and they have a say in what we do.”

Petersen knows track is more of an individual sport with the competition and the personal goals, but likes to look at it as a team sport.

“The team can make each other better by pushing you to go faster,” Petersen said.