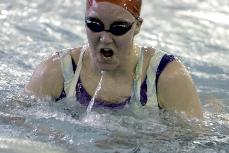 As the swimming season comes to a close, the team is able to look at their success this year and have high hopes for their final meet.

At the end of the season the team has only nine girls. Head Coach Mark Wagner said he believes the low numbers are mostly his fault because he was too hard on them at the beginning of the season.

He said in order to compete with the other teams, Simpson needed to build the size. It was difficult, though, for him as this is his first year as a college coach.

Wagner is flexible with the girls and allows them to practice when they are available, as he understands that school comes first. He also added that, in some ways, he has never worked so hard because of the differences in high school and college swimming. Recruitment was something he never had to deal with in coaching high school and it has proved to be a challenging aspect of things.

“With division three schools, athletes don’t have to sign a letter of intent,” Wagner said. “You never know who is going to come.”

Sophomore Chelsy Croson also said the low numbers on the team have been a setback this year.

“We definitely need more girls in order to complete on the same level with others in the conference,” Croson said. “Anyone who wants to try out should. It may be an individual sport, but there are team aspects as well.”

Croson said she is very happy with the way this season went as the first season with Coach Wagner. She said they had more meets, more intense practices and everyone dropped times this year.

Junior Melody Burgus agrees with Croson about Coach Wagner being very beneficial to the success of the team.

“This season has been a lot better than last year,” Burgus said. “We scored over 100 points at the last meet, which is the first time we’ve ever done that.”

Burgus broke her own previously held school record in the mile by almost 20 seconds.

Croson said the main accomplishments this year have been everyone’s time drops. She said many people have dropped a lot of time this year and the team has immensely improved.

The team had their best finishes at the Loras Quad on Nov. 11, 2006 and at the Morningside Triad on Jan. 27, 2007. The team finished third at both events. The team also finished fourth at the Iowa Conference Championships Feb. 2 and 3.

The team’s final meet, the Liberal Arts Invitational, is coming up on Feb. 15, 16 and 17 at Coe College. The team tapers for this final meet all season long. Tapering is a way of building endurance for swimmers. At the start of the season they swim a lot of yards with less rest in between sets. Eventually they swim faster with more rests in between sets. It is a large meet, with 15 teams from all over the Midwest and surrounding areas. This meet is a last chance meet for teams to compete in nationals.

“Hopefully all the work pays off,” Croson said.