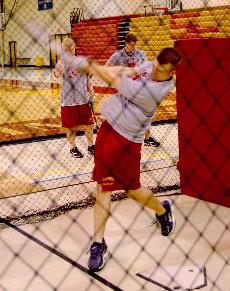 The Simpson baseball team may have lost a lot of seniors and experience, but they still have the strength of their core of arms to make an impact this year.

Due to the weather, the team has limited practices in preparation of the upcoming season. They can only lift weights and utilize the batting cages and Cowles for practices.

Head Coach Ben Blake said that with the gym, it’s hard to have a real practice. At one time, Hopper and the batting cage were the only ways to practice. He wants the pitchers to get their arms in shape, outfielders and infielders to work on their footwork and the hitters to get as many swings in as possible.

“The ceilings aren’t high enough to take fly balls,” Blake said. “Sometimes we only get half the gym, so there is space confinement with 40 guys, the floors are a little slick, and it’s hard to see with the light-colored walls.”

This will be Blake’s first year as head coach after being an assistant coach. Under former coach John Sirianni, the team had a record of 26-10 last year.

Blake said the strength of the team exists in the pitching staff. Last year, the pitching staff had a team Earned Run Average (ERA) of 4.29, led by then-junior pitcher Chad Scieszinski with a 5-0 record and an ERA of 4.02.

“I have 10-11 guys I can send out to the mound and feel comfortable with their ability to compete,” Blake said.

He does think the batters need to have more quality swings and at bats, and the challenge of getting the younger players up to key, playing like veterans, is also very important.

“I want to try to take individual talents and try to establish fundamentals to compete at the college level,” Blake said. “I’m laid back and just want them to play their game.”

Blake described his coaching style as American League–getting a guy on base and another player to hit for the gaps, while using the running game for offensive purposes.

“Coach Blake is probably the most knowledgeable about baseball, because he knows about all the positions,” junior pitcher Joey Hajduch said. “There is not a better guy to take the job, because he knows Simpson and the community.”

Hajduch had an ERA of 4.97 and one save last year. Hajduch feels confident in the other pitchers on the team, but thinks the consistency needs to improve.

“Coach can fill any pitcher in a game and have confidence he can get three outs,”

Hajduch said. “Even though slumps in baseball are bound to happen, we need to minimize them.”

Junior teammate Shane Akers, who went 2-0 with an ERA of 2.92 last year acknowledges the loss of many position players, and knows the younger players have to step up.

“Our goal is to win conference and will get to the NCAA [Tournament], since we came close last year,” Akers said.

According to Blake, he went away from setting record or number goals.

“I want to create a good solid program with a good group of guys, not only as players, but people,” Blake said. “I want them to be respected by the way we play and go about the game of baseball.”