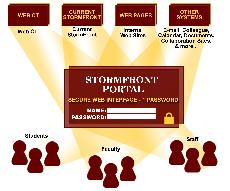 Simpson College and Datatel are working to give the Simpson Web site a new look, easier access to students and centralized communications across campus.

The proposed portal would decrease the number of mass e-mails to students and faculty by categorizing them into groups such as messages from faculty, other students, personal messages and campus-wide notifications. Another feature would be the use of a single password to log onto all systems.

“It will be different from the current system because it is going to cater specifically to you and focus on the internal audience,” said Kelley Bradder, vice president of information services and chief information director. “It creates an online community. Announcements and emails are more geared toward you.”

The proposed portal would also be more mobile, as it would allow students and faculty to save directly to the portal. They would then be able to access their documents and information at a later time anywhere there is Internet access. Information saved on the portal would be backed up nightly.

The proposed system would make the functions of WebCT easier to access as well. Groups, organizations and committees could communicate with their members with links similar to those currently used by WebCT.

“We would be using our existing technology and stored information in a new and better way,” Bradder said.

These changes are still being discussed. Bradder said she would like to see more campus input as plans move forward.

“That means we are going to have to have some campus-wide communications about what goes where,” Bradder said. “I can see that there are going to be policy decisions to be made. We need to think about this as a community and decide together how we’re going to communicate to benefit everyone.”

Bradder said that ideally the system would be ready for implementation by next fall. She also said she didn’t want to implement something people weren’t excited for and wouldn’t use.

“I have given students my word that we will not put it up unless it is reliable,” Bradder said. “I won’t promise it will be there unless it will be a reliable tool for us to use.”

Members of student government were presented with plans for the portal in a Datatel Discovery meeting. So far there has been positive feedback.

“It would be a really cool system,” senior Jenna Simpson said. “The students who heard about it were very enthusiastic about it.”

Students, faculty and staff would all have different looks to their site. The site can also be tailored to each individual within those categories.

The general public would see something different as well. This would prevent the public from viewing student information.

Students and faculty would also be able to add bookmarks and news feeds to the portal. These features would be mobile.

“I had one student tell me it was like Facebook, but with your whole life,” Bradder said.