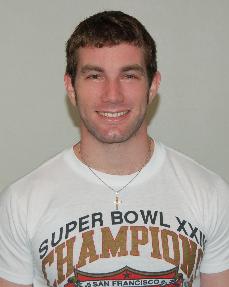 Zac Craig, a fifth year senior, loves teaching. He has one degree from Simpson in athletic training and is finishing up his second in education.

“I wanted options of what I could do and both of these majors correlated with one another,” Craig said. “It wouldn’t be too much extra work.”

After talking with Justin Snyder, strength and conditioning coach, Craig decided that after he graduates in May he wants to intern at Louisiana State University and attend graduate school.

While some students finish up their classes at Simpson before graduating, Craig spends most of his time off campus. He’s done with his classes but attends bi-weekly seminars to catch up on anything new.

Craig also spends a lot of his time at Whittier Elementary school in Indianola, where he’s student teaching from 8 a.m. to 3 p.m. every weekday. He deals with approximately 300-350 students ranging from grades first through fifth. Soon, he’ll be moving to the high school to start working with older kids.

“You don’t realize how much you can affect a student’s life until you get into the classroom and interact with them,” Craig said. “I hope to teach physical education and health or physiology.”

When Craig isn’t spending time working at schools, he can either be found working at Menard’s or enjoying some of his favorite activities. Craig likes to play racquetball, lift weights and help with the athletic training weight and conditioning program.

On a more low key relaxing day, Craig can be found laying around on his couch.