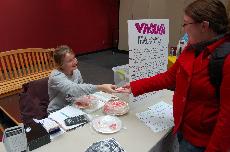 What began as many interviews with many women turned into a play that has become regarded as a powerful tool to globalize a movement to stop violence against women.

Simpson students and faculty will be performing “The Vagina Monologues,” written by Eve Ensler, on March 3 at 7:30 p.m. and March 4 at 1 p.m. in Camp Lounge in BSC.

The play began as Ensler traveled around the world interviewing women. She then turned the interviews into monologues. These are real women telling other women’s stories.

The production of the play began as a women’s studies project, led by senior Jamie Olberding and senior Lucy Wilson. They contacted senior Lindsey Johnson, a theatre major, for her theatre experience and expertise.

“I was thrilled,” Johnson said. “Not only to fulfill a women’s studies requirement, but to be more proactive for such an important and seemingly neglected issue in today’s world.”

The issue is the awareness of violence against women. To attend the production there is a mandatory donation at the door. All of the donations from the production and other activities along with the V-Day campaign will be going to the Warren County Domestic Violence Coalition.

“‘The Vagina Monologues’ is a production designed to empower women to take control of their bodies and lives, and be proud of who they are,” Johnson said. “I encourage everyone to see the production.”

“The show has some extremely entertaining parts,” Seehusen said. “It also presents some important messages about women, including women’s rights and femininity.”

Jackie Brittingham, associate professor of biology, believes the play is a way for victimized women to get their voice heard.

“Many women are victimized by someone they know,” Brittingham said. “I’m sure the women on this campus and in this community can relate to this issue on a very personal level, and it is my hope that this production will serve to be a voice for them.”

Other activities during the week of the production the are a bake sale, distribution of pamphlets in BSC and a self-defense workshop.

“The monologues have provided a forum for women to speak more openly about their bodies, and their personal experiences with their bodies, which can have a major impact on their overall health and well being,” Brittingham said. “As a woman and a mother, I am compelled to participate in this celebration of women’s sexuality with the Simpson community.”