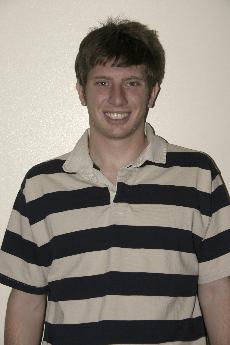 Listen up, underclass men and women, Grandpa Mark, the senior Buddha of Simpson wisdom, is speaking to you:

My head throbbed. My throat was parched, and I entered a surrealistic whirlwind.

I hadn’t thought about it before, but sweaty and bloodshot, I realized at some point during my four-year intellectual stupor, my universe had shifted.

For the last seven semesters my life has orbited around two gaseous mental bodies: soccer and journalism.

But now that I’m actually old enough to drink, I have to find a job or go to an even more expensive school, and everyday mom considers cutting my financial umbilical cord a little more.

Athletics had been a primary drive toward college four years ago. After an unfulfilling visit at Drake University, I decided to hang up my Division I aspirations to play under Simpson’s congenial soccer coach, Aziz Haffar. But after two seasons, he surreptitiously “resigned,” and after two more seasons, my career was over, and all I was left with were two shoddy ankles ridden with shin splints.

In high school, I was known as the weird journalism kid. I spent unspeakable hours in our infamous “j-room” where my staff and I would concoct stories of high journalistic merit that covered important issues such as how parking sucked, how cafeteria food really sucked and how the high school’s drug dog really, really sucked.

I carried on this tradition when I came to Simpson. I was diligent in my first two years, setting aside other extracurricular activities to work hard on the finest news Simpson could muster in a vicious attempt at one-upping others on a path to a journalistic career.

Interestingly though, while this was occurring, I was enrolled in Spanish classes with Mark Bates, associate professor of Spanish, who slowly hooked me. I signed up late for LAS groups my first year, and his class was the only group still available within my realm of possible talent.

Somehow I became a Spanish major and loved it, almost as much as I now just kind-of love journalism, which is bringing me to a crossroad.

Stay with me kids, this trip down memory lane is going somewhere. This isn’t a biography, and it’s not an essay on egoism, though it may seem that way.

I want you all to not make the same mistakes I did. For the last four years, I shut myself away from foreign experiences because I thought I already had the rest of my life figured out–at age 18. I moved from class, to soccer, to “The Simp Lab” without considering any other possible routes, and I’m kicking myself for such obtuse thought.

I only came in contact with a foreign language by shear mistake, and now I can’t imagine myself without it. I don’t even like to think about all the things I missed out on.

Many of you, I’m certain, are saying things right now like, “I’m not good at anything, you arrogant narcissist…” or “I don’t know what the hell I want…”

What I’m telling you is that that’s great. Realize the best thing about being our age is knowing you’re always right, especially when you’re completely wrong.

Therefore, keep an open mind about what you like to do, and be weary of putting your eggs in time-consuming baskets.

I’ve learned a considerable amount from both soccer and journalism. Both trades emphasize hard work, discipline, attention to detail and, most importantly, how to take caustic criticism. But my view was narrow throughout my career, and I hope you take note of this counsel.

The Buddha will sleep now.