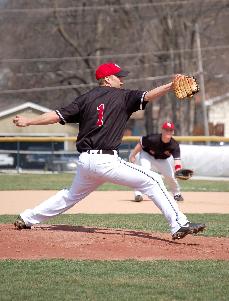 Simpson’s baseball team treated the Arizona spring break trip as “spring training” as the members went from practices in the gym to games outside.

The team finished 4-6 in Arizona. The men opened the spring by defeating Westminster from Missouri 13-3 and 9-8 and lost a few close ones.

Head baseball coach Ben Blake used the games in Arizona as a chance to see the makeup of the team. In doing so, he shuffled the lineups around for each game, since the team is predominantly left-handed hitters. He also played the younger players more.

“You could tell we are a young team,” Blake said. “This is growing period, as we played well at times and sloppy other times.”

Blake said he thought the team had trouble holding onto leads, but overall the men figured out what they need to do to finish off games.

“They did well in battling back and executing in the games,” Blake said. “It did seem as though we weren’t focused in the sixth and seventh innings. We need to buckle down later in the games.”

According to Blake, the men have good production offensively from the lead-off hitter getting on and bunting to move the runners into scoring position. The defense’s strength is second base and shortstop, but as a team defensively, the fielders are quick and have solid gloves.

“There are flashes of brilliance and an occasional kick or two defensively,” Blake said.

Assistant Coach Brian Baker thinks the team has good fielders, so their fielding did not cost them games.

According to freshman Ricardo Flores, there were a lot of mental errors in the games in Arizona.

“Our chemistry needs to be worked on, but we will learn as we go along,” Flores said.

The team members get together after each game to review the game and address the positives and negatives. They continue to work on the areas of improvement.

Sophomore Jared Swim thought the games in Arizona were tough, as Simpson gave some games away, but wanted to get off to a good start after break.

“We want to come out and get some early wins by building off the last game won in Arizona,” Swim said.

The team learned a couple lessons against Webster from Missouri, losing 21-5 and 15-6.

“We basically came out with our No. 1 pitcher, sophomore Jared Sass, on the hill and the umpire had a small zone,” Blake said.”They [Webster] had a seven run inning. It was only the second day, and having fresh arms was more important in order to compete. We put some guys in to give us some innings and reshuffled the order of pitchers. Webster was a good hitting team as well.”

Swim said being down early was hard for the Storm.

“We had pressure on us early and struggled to adjust, plus we didn’t come out playing our best,” Swim said.

Blake said the team has a lot of games to improve as the season progresses, and the men will play some scrimmages against each other to work on different scenarios.

“We know we are young, but we want to do our best, play hard, win games and play to our abilities,” Flores said. “Arizona was a learning experience for us.”