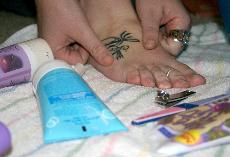 Few people ever consider the hazards of getting their nails done. After all, people do it all the time. Perhaps people should think twice before having a pedicure.

Due to the recent investigation over infections caused by unclean and unsanitary filters in the foot tub, more people are becoming weary of having pedicures.

KCCI News Channel Eight recently featured segments on the mishaps in nail salons. Some of the problems people have experienced include yeast infections, cysts, fungi and other bacteria if the pedicurist isn’t using clean equipment or the water isn’t cleaned after the last person.

“It’s really easy to pass a fungus from one person to the next,” said Registered Nurse Joan Blum at Alegent Health Mercy Hospital in Council Bluffs. “If the products aren’t sanitized in between each person, bacteria can be passed easily.”

The main way people pick up infection is through filtered tubs.

Professional Body Works in Indianola doesn’t use filtered tubs but uses pipe-less tubs instead. There is one section where the water comes in and another section for where the water drains. The water doesn’t flow through filters at all so then bacteria and germs can’t be spread.

“My salon has not been inspected since 2000,” said Brandi Larson, Professional Body Works owner/licensed nail technician. “There aren’t enough inspectors, and the ones we have aren’t doing their job. We make sure to document all of our cleaning routines when we do them.”

The tubs at Tina’s Nails in Indianola are also pipe-less. After each pedicure, the employees take out the part that’s in place instead of the filter and clean it. They also clean the tub out and sanitize the tools after each customer.

“We soak our parts every night after we close,” owner Tina Nguyen said. “We haven’t had any problems with our customers getting infections, and this story (from KCCI) hasn’t affected our business.”

Andy’s Nails in south Des Moines also hasn’t lost business or been affected in any way after the story aired. The salon goes through many steps in making sure their facility and equipment is clean.

“We clean our tubs out after each customer, and we clean our filters out every night,” owner Andy Vo said. “We haven’t had any loss of business so far due to the scare, and our salon is inspected at least once a year, sometimes two to three times a year. The last time we were inspected was about five to six months ago, and we didn’t have any problems.”

Despite the recent news about problems with pedicures, Simpson students still get their nails done.

“The last place I went to was Top Nails in Des Moines, and I’ve never had any problems,” said junior Amanda Botts. “I get a pedicure every couple of months in the spring and summer.

One should to use caution in deciding whether to get a pedicure or even a manicure. There are many health factors to consider and picking out the right salon may take time, but it’s worth it. Not all nail salons are unsanitary and it’s up to you to decide if the salon is clean enough for you because it’s not worth getting a disease or infection just to have cute nails.