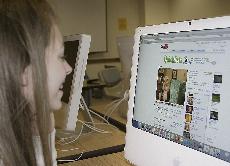 Have you ever thought of yourself as a videographer or just find homemade videos amusing? If so, look no further than YouTube, the latest hotspot on the Internet.

“YouTube is a self-produced video Web site where anyone who has created a video can upload it, and put it on the Internet for anyone to see,” said Brian Steffen, professor of communication studies.

YouTube has something for everyone. It has music videos, movie and television clips, documentaries and home videos created by your average person. YouTube even has the execution of Saddam Hussein.

“Every now and then, I’ll try to find a documentary I want to watch on YouTube,” senior Nate Nims said. “Mainly, the videos are people doing stupid things and cats running into things.”

Currently, there are only a few videos that are linked to Simpson College on YouTube. There is an Underground performance called “Ode to Phonathan” and a performance of “Georgia on My Mind” by the Simpson College symphonic band, but soon there will be loads of student-produced videos.

“Next year, we will have professional quality video production equipment that will be used in classes,” Steffen said. “The videos that students produce will be placed on YouTube.”

YouTube has been gaining in popularity ever since Google bought it. Other Web sites are constantly adding links to YouTube, and there is a plethora of promos.

“I usually just go to YouTube through links from other Web sites,” senior Grant Carlson said. “I really like the mash videos that they create of the characters from “The Office.”

The problem with YouTube is there is no censorship when people upload videos. Once the video is up, people can flag it if they feel it is inappropriate, but by that time five ten-year-old boys have seen Paris Hilton’s nipple.

There are also plenty of underage girls dancing around provocatively in videos. It is not a good idea to give pedophiles a legal way to look at teenage girls in their underwear.

“There is an excessive amount of girls dancing in their bedrooms in their underwear, doing stripteases,” Nims said. “These girls are really young, and it is straight pedophilia.”

“YouTube is so popular because people like to create videos and send those creations all over the planet,” Steffen said. “It is the ability to get noticed on a world wide video.”