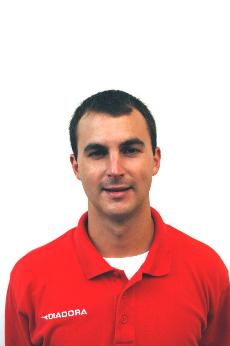 Cory Chapman, head women’s soccer coach and head athletic facility manager, wants to turn a corner and compete on a regional/national level year-in and year-out with his team. The Simpson women’s soccer team won the conference championship last fall, and competing is one of the main goals Chapman has.

“We want to be able to compete at all times,” Chapman said. “When someone plays Simpson, they will remember who we are.”

Chapman graduated in December of 2001 from Wisconsin Lacrosse. He became head coach at Simpson two years ago and has already made many improvements.

Chapman is in charge of all the aspects of women’s soccer. He coaches, recruits, trains his team and covers varsity home events, with the help of his 40 to 45 work study students. He also keeps the maintenance of the weight room at its best. Chapman serves on the Athletic Marketing Committee, which was formed a few years ago. Its purpose is to generate support from outside businesses for Simpson athletics.

In his spare time, Chapman likes to spend time with his two-and-a-half-year-old daughter. She takes up most of his spare time, and his wife is expecting again in October.

“I’m praying for a boy,” Chapman said. “When I’m not spending time with my wife and daughter, I like to golf and fish.”