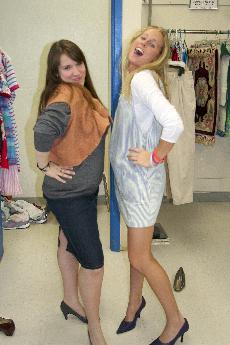 Students will hit the fashion runway to raise money for the Goodwill and to promote the Simpson chapter of the Public Relations Student Society of America.

The event, “Simpson College’s Next Top Model, Goodwill Style” is a fashion show put on by PRSSA as a way to promote the group’s services on campus and collect merchandise for Goodwill.

It will take place March 27 at 8:30 p.m. in BSC, and everyone attending is asked to bring an article of clothing or a household item to donate to Goodwill.

PRSSA is a student organization that offers free advertising for other groups on campus. It has helped with a number of activities, including creating the Homecoming and May Term t-shirts and promoting the Vagina Monologues.

The fashion show started three years ago after members of PRSSA attended a conference in New York City. Other chapters shared ideas from events they had put on. Simpson members decided a fashion show would be a fun way to spread the word about their group.

“The event came about because no one knew what we were on campus,” said senior Sarah Heim, assistant project manager. “It gave us experience working with an actual organization.”

The group considered a wide variety of stores for their fashion show but decided Goodwill was the best choice.

“We kind of went to other places but decided on Goodwill,” junior project manager Emily Salberg said. “It worked out better than anything else we could have gotten.”

The theme for this year’s event was taken from the hit television show, “America’s Next Top Model.”

“That night we’ll have a panel of judges who will narrow down the number of models, and then we’ll have a walk off,” said junior Christine Stearns, co-chairman of model relations. “Then we’ll have Simpson’s next top model.”

The nearly 40 models include faculty members and students from all over campus.

“We picked people who were well known on campus and involved in a lot of things,” said junior Jessica Ellingson, co-chairman of model relations. “We tried to represent every group and organization on campus.”

All models wear clothing from Goodwill during their walk on the runway.

“It’s been fun,” Stearns said. “We found some good outfits at Goodwill. Overall, everyone is pretty excited about it.”

Goodwill’s store manager Michelle Millman was enthusiastic about the project from the beginning.

“My supervisor knew it had been a success in the past, and it has worked out well so far,” she said.

Millman noted that college students make up a large chunk of Goodwill’s client base in Indianola.

While members of PRSSA are working to promote their own organization, they are happy to be able to help out Goodwill as well.

“I hope we raise a lot of items for Goodwill because they’ve been so generous to us in the past years,” Salberg said.

Stearns and Millman both agreed the event put a positive light on Goodwill, which is something PRSSA is proud of.

“We like people to think of Goodwill as a positive organization,” Millman said. “Anything promoting Goodwill is always a plus.”

The fashion show continues to grow in popularity, and organizers expect another strong crowd this year.

“I hope people who come love it and have a good time,” Salberg said. “We’d really like to bring in new members who want to get involved.”