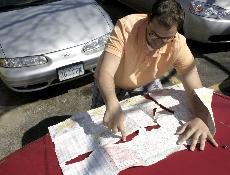 This site has caused hours of procrastination, made people famous and can turn anyone with a video camera into a moviemaker. And the site was created by people in our generation.

As stated before, it can turn any novice into an international star. I’m about to embark on stardom.

I’m going to create the newest masterpiece for your viewing pleasure on YouTube. If you haven’t visited YouTube before, people create movies and plaster their products on the site for the world to scrutinize. YouTube has categorized the site so you can view movies by genre.

Other people use YouTube as a medium to get their music out there. No matter how you slice it, YouTube is used and viewed by gaggles of people.

I’ve had help with the topic of my video.

I’m doing a parody of Justin Timberlake’s “SexyBack,” but I’m bringing my “FannyPack.”

I mimicked his video the best I could, but showing off my fanny pack.

At the moment, the idea sounds great, but the time commitment was colossal.

The cinematic performance must start with astounding lyrics. Enter problem number one.

Lyrics are usually really difficult to develop, but JT’s song is pretty redundant.

The lyrics are made with care and are dynamite, and now the video must be constructed.

After watching the music video, I don’t think I could quite mimic what JT does. He has more time, more staff, more talent and, most importantly, more money.

I have one thing JT doesn’t have…

I have no shame.

So, the video will take a different route, and I think JT will be jealous when he sees it.

I walked around campus with my fanny pack, dressed like him, brushed by people saying I’ve got my fanny pack and they’re jealous.

Since you can’t make a movie in one take, you have to cut and edit.

Problem number four and on…

Trying to edit the movie makes me appreciate the cinema pioneers. I tried to use an Adobe program, and I did not succeed. To make any film of any size takes an incredible amount of time. One of the biggest problems I encountered was the sound editing. I couldn’t find the instrumental version. Without the music behind what I’m saying, the movie has no heart.

However, I’ve got somewhat of a hilarious product, but I don’t think the final edit will be openly public yet.

I look to the filmmakers with adoring eyes. The time and talent used to generate a quality film far surpasses my expertise. On YouTube, there are quality stop-animation films for your enjoyment.

As you are killing time for whatever reason, stop by www.youtube.com and see the filth and talent smeared on the site, and you might want to look for cwredsoxfan because you never know what he can create.