Students Against Drug Prohibition forms in ‘pursuit of justice’ 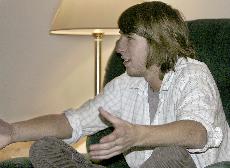 The haze of fume and smoke hung so thick in the air of Apartment 3 in Hamilton on Feb. 21 night that the eight members who gathered there were forced to resort to identifying each other by voice, as vision had fallen into obscurity for a number of different reasons.

The so called “Drug Meeting” held there carried on for two hours or more, amounting to little more than a political alias under which these criminals operated, babbling endlessly on in the excited stupor of their intoxication.

The most coherent conversation that one might assume they would witness was between two ex-convicts discussing the first time they off’d somebody while smoking crack cocaine and planning a bank robbery.

This negative image of the group is entirely the image that co-founders seniors Matthew Leavenworth and Megan Shipley of the club known as Students Against Drug Prohibition wants to avoid. For the two of them, their crusade is not about the mass legalization and increased availability of drugs in the American market, but what Leavenworth called the “pursuit of justice.”

“I am not trying to communicate with Simpson students and faculty members that I support drugs or drug use,” Leavenworth said. “But rather that I believe that there are better solutions to the drug problem in America than those in place today.”

Both Leavenworth and Shipley feel America has gone in the wrong direction with drug laws, choosing to make them a legal and penal issue where the only coherent law is one that enforces stricter and more stringent penalties for those who have made choices pertaining to their own bodies. “In a nation foundationally built on freedom, it is remarkable for me that we are putting rapists in jail and declaring a war on drugs as it seems it should be the opposite,” said Leavenworth.

Much of the groups focus will be on the stringency with which our nation pursues and prosecutes drug users, which is why during the meeting the group’s conversation centered on this very notion of why are we putting drug users in jail.

“Putting drug users in jail is like the countries that cut off somebody’s hand for stealing,” Shipley said. “They do this to send a message rather than pursue justice.”

This is the very embodiment of the stances of the SADP that all feel America has simply missed its mark in its attempt to solve the issue of drugs through evading the constitution, creating a black market in which drugs flourish and instituting laws that create criminals out of individuals who were not to begin with.

These ideas that were circulating in the meeting are not foreign ideas that originated with these people. Even faculty members like Professor of Philosophy John Pauley sense the ineffectiveness of our government.

“The government causes gross personal harm to individuals in our country,” Pauley said.

The SADP wants to reorient the United States in a direction that can help these individuals and create laws that can more efficaciously impact a society saturated in drugs.

The eight individuals who gathered in Hamilton, Apartment 3 were not drug addled lunatics rambling on about their own desire to engage in lascivious activity, but rather a group of political components who desire to rid their country of a perceived injustice.

For the SADP, they believe that it is simply not right that our country pursues drug users with the same diligence that they pursue rapists and murders.