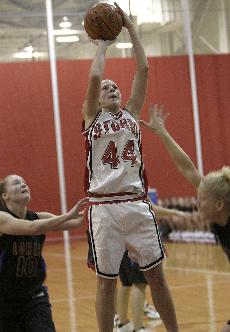 The men’s and women’s basketball teams lost in the Iowa Intercollegiate Athletic Conference Tournament Semifinals, but the women are continuing their advance in the NCAA Tournament.

The women are on to the Sweet 16 to play New York University in New York City March 9 at 6 p.m. in the Jerome S. Coles Sports Center.

The women’s team gained an at-large bid to the National Tournament at Menomonie, Wis. against the University of Wisconsin-Stout on March 2. The women won, 91-86, ending 15th-ranked Stout’s 23 home game winning streak.

The women then played Wheaton College from Chicago on March 3 and won, 81-58.

Junior Katelyn Whiton had 20 points, and sophomore Carrie Larson made 16.

The women had a 21-6 record before the NCAA Tournament. This is the women’s third consecutive appearance to the National Tournament.

Brian Niemuth, head coach of women’s basketball, said receiving an at-large bid to the National Tournament was one of their goals this year. The top 20 receive an at-large bid. There are 63 teams total in the tournament.

“They [the players] were very excited our season continues,” Niemuth said. “The ladies wanted to keep playing.”

In preparation for the tournament, the girls practiced against a group of guys as they have done all season.

“The team we are playing in the first round is big and very physical,” Niemuth said.

Niemuth likes up-tempo play and wants his players to play hard. He feels the team’s weakness is the inexperience, since the players are young, but feels the depth of the team is their strength.

“We really came together as the season went along and played as a team,” senior Tessa Van Oosbree said.

Niemuth feels the point guard position has improved this year as has their play on the road. According to Niemuth, the team has good inside and outside shooting and can count on their reserves.

“Sophomores Whitney Franker and Carrie Larson, have started, but they are our two top scorers and rebounders off the bench,” Niemuth said. “Franker is one of the better players in the league.”

The girls have only one senior on the team and three total upperclassmen.

“I lead by example,” Van Oosbree said. “I motivate the younger players and pick them up sometimes.”

Van Oosbree scored a career high of 21 points in her final game in Cowles Fieldhouse in a win over Coe College in the first round of the IIAC Tournament.

“I was very proud of her,” Niemuth said. “She stepped up and took over the game. She’s the only player I’ve had to tell to shoot more.”

As the team enters the tournament, it will be led by junior Ashley Katch, who averaged 8.6 points per game and had 136 blocks to make her career total 224, which is a Simpson record.

According to senior Jason Parkinson, the men and women give each other moral support and some of the guys made the trip to Wisconsin.

The men finished the season with a record of 18-9.

According to Bruce Wilson, head coach of men’s basketball, the Simpson basketball men’s team has only had six teams with 18 wins or more since 1905.

Wilson believed the strength of the men’s team was their six seniors. Senior Ryan Hittenmiller averaged 17.6 points per game and finished seventh in scoring at Simpson with 1,537 points.

Parkinson broke the record of three-pointers in a career with 171 and is eighth in career points with 1,425 points. Senior David Ferezy broke the record for blocked shots in a season with 62.

Wilson said the team struggled in shooting the ball from the field and the defense wasn’t at its best in the games they lost.

“I was disappointed in our rebounding this year, since we led the conference in rebounds last year,” Wilson said.

Wartburg and Dubuque were the only two teams Simpson lost to that finished with losing records. Otherwise, the team finished their season with a loss to Loras, who only lost one game in the conference. The team did finish strong, going 10-3 in the last part of the season.

Parkinson scored 35 points in his last home game as the team beat Central in overtime in the first round of the IIAC Tournament.

“It seemed as if everything I threw up at the basket went in,” Parkinson said. “The guys did a good job getting me open with picks and passing.”