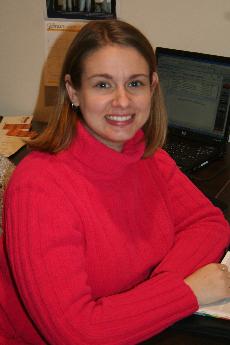 Most students on campus may not know Carrie Clogg, but that doesn’t mean she isn’t an important asset. Clogg, director of government and foundation support, is involved in getting grant money for Simpson.

Any grants written for the college go toward money for new buildings being built, such as the new student center, equipment for the faculty or grants for curriculum. Clogg’s job involves putting proposals together in order for the college to receive the grants.

“I work with elected officials to get Simpson’s name out there and inform the public what’s going on and seek support for the strategic plans,” Clogg said.

Growing up in Indianola, both of her parents were Simpson graduates, so Simpson was always a big part of Clogg’s life. After graduating from DePauw University in Greencastle, Ind., majoring in music business and vocal performance, she attended Lesley University and received her Master’s of Education.

Her first job after graduating was assistant director of education for Lyric Opera of Kansas City. She worked there for four years before taking the position as the director of education and outreach at Opera Columbus in Columbus, Ohio. After working there for six years, she began looking for a change and wanted to be closer to her family. Clogg looked for a job at Simpson and that’s when she and her husband decided to move back home. Clogg has been working at Simpson since May 2006.

“I’m so excited to say that my husband and I are expecting our first child in July,” Clogg said. “We’ve been spending some time preparing for that.”

When she’s not working at Simpson, Clogg is involved with a lot of outside activities. She directs the youth choirs at the Presbyterian Church in town. In January, she directed the “Three Billy Goats Gruff” for Opera Iowa.

She also substitutes at the Iowa Youth Chorus, volunteers at Orchard Place in Des Moines and is an advisor for Alpha Chi Omega at Simpson.