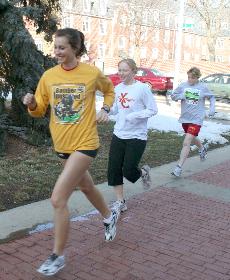 As the cross country team continues their search for a new head coach, one factor being taken into consideration is the candidates’ gender.

“It has always been a goal of the athletic department,” Smith said. “We would like to see a few [female] additions.”

Along with Head Volleyball Coach, Smith is also the Senior Women’s Administrator for the athletic department. Smith also said she feels having more female coaches would be very beneficial for our female athletes at Simpson College.

“More female coaches would give the girls more leaders and role models to look up to,” Smith said.

Senior cross country runner Danielle Farrell thinks adding more female coaches should be an element of a growing athletic department, but she also said she believes male candidates should not be turned away from the job simply because they are not female.

“I feel that if there is a male coach who is seemingly just as or more qualified, that person should be viewed appropriately,” Farrell said.

Farrell said while female coaches may benefit female athletes, she is unsure about how men would feel being under the direction of a woman.

“Idealistically, I think [having more female coaches] would be beneficial for a number of reasons,” Farrell said. “For female athletes, it could mean being able to relate to another person who is competitive and female, which is sometime difficult for other people to understand. For males, I think it would offer some of the same things but it could also be harder for them to relate to a female coach.”

Smith said coaching is coaching, but female coaches bring different intangible things to the game than men do.

Farrell recognizes the field of female coaches is smaller than men, and she is willing to accept that for now.

“As an athlete, I am willing to be under the direction of a male if it means recognizing that, at this point in time, many female coaches are struggling to compete with the men in the same field,” Farrell said. “I want to see more women in the [coaching] field, but I also want to know that the most qualified, competitive coaches are being used.”

“I think it’s great that Simpson is taking the initiative to implement more females on the coaching staffs” Salberg said. “My hopes are that they hire the best person for the job – regardless of gender, which I am confident they will.”