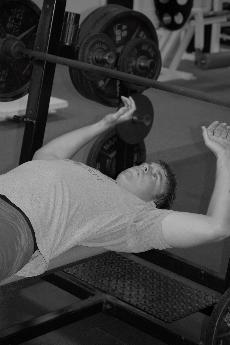 It’s all part of an annual fundraiser, coined the Lift-a-Thon, which combines weights, goals, improvement, and money.

“They (the participants) were tested out when they came to see how strong they were and then tested again to see how much strength they’ve gained,” Head Football Coach Jay Niemann said.

Next year’s returning players were tested to find their max for the bench press earlier in the year. Then they were sent on a mission: to collect pledges.

“Most of the guys go to their hometown to get [pledges] and usually they do pretty well,” junior tight end Ryan McDonough said.

The pledges provide an incentive for the Storm football team to increase the amount they can bench press. The players went out and asked for donations for every pound they could increase their max. Then, over spring break, they were assigned to go back to their donors and collect the appropriate donations.

For example, a player received a pledge of $2 for every pound more he could bench press than he did in the previous lifting test. When the football team retested, he lifted 25 pounds more than he did earlier in the year. During spring break, he would have then collected $50 from the person who had pledged.

As for receiving pledges, the going isn’t always easy. According to McDonough, Storm football does two other big fundraisers each year, and sometimes the players feel like they are continually knocking on the same doors. He finds himself often asking extended family members and family friends for their support.

“It kind of seems like you’re always asking the same people,” McDonough said.

Another obstacle players are forced to hurdle is the lack of enthusiasm which is occasionally encountered.

Junior wide receiver Tad Stoner concludes that not everyone is as excited about raising funds for the Simpson football team as others, whether or not it includes pumping iron.

“We enjoy raising money for the football team but sometimes it’s difficult to get other people interested,” Stoner said.

The Lift-a-Thon, which has been done every year since Niemann came to Simpson, tends to fluctuate in total profit due to changes in the size of the team. This year, Niemann is expecting a slightly larger amount of money raised since the squad is bigger.

Each player is expected to try to achieve the goal amount of $125 dollars. In the past, McDonough recalls that most teammates bring in around $100 to $150.

Although the main objective is to fundraise, the Lift-a-Thon encompasses more than just acquiring money.

With the help of Justin Snyder, head strength and conditioning coach, the football team also increases their benching pressing ability through hard work and diligence. The more money the players want to raise, the harder they have to work in the weight room.

“I think this [the fundraiser] is more for strength and conditioning,” Stoner said.