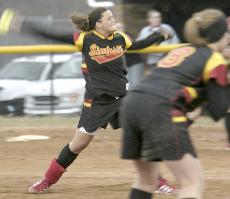 As the regular season comes to a close for baseball, softball, golf, tennis and track and field, the teams are gearing up for the post-season. It is time to reap the rewards of a season’s worth of hard work and to earn the opportunity to bring home some hardware.

Simpson’s softball team is currently ranked No. 10 in the nation with a 22-7 overall record. One would expect the Storm to be a front-runner in the Iowa Intercollegiate Athletic Conference. However, Simpson is 5-4 in the IIAC and holding on for dear life.

“We are currently clinging to sixth place in the conference and a possible berth in the IIAC tournament,” said Head Softball Coach, Henry Christowski.

The IIAC Softball Tournament will be held at Rogers Sports Complex in Fort Dodge, Iowa May 3 through May 5.

“Hopefully we’ll use that to gain a little confidence going into the last half of the conference season,” said Head Baseball Coach Ben Blake.

The IIAC Baseball Tournament will be held May 10 through May 12 at Veterans Stadium in Cedar Rapids, Iowa.

The men’s track and field team has received a boost in numbers in comparison to recent years and has been taking advantage of it. Receiving contributions from several freshmen and underclassmen thus far, the Storm have been competitive. The Storm placed fifth at the Central Invitational, the only meet they have competed in thus far that has kept team scores. The IIAC Championships will be held at Simpson May 11 and May 12.

The men’s tennis team is in the top half of the conference, holding a 4-7 overall record and 3-3 IIAC record putting them in fourth place. Before the IIAC Tournament April 26 through April 28, Simpson will take on Dubuque and Cornell, two of the bottom three teams in the conference.

“We are looking at finishing the regular season playing more consistently,” said Bob Nutrgrass, head men’s tennis coach. “The goal for us, then, will be to finish in the top four in the IIAC team tournament.”

The Simpson men’s golf team is having one of its better years in recent history. The team has placed fourth at the Webster Invitational in Missouri, first at the Simpson Invitational and eight at the Grand View Classic, where the men shot a season-best of 599. They most recently placed ninth out of 24 teams at the Buena Vista University Invitational in Storm Lake.

“The program is stronger and deeper than it has been in recent years,” said Larry Shoop, head men’s golf coach. “We are playing at a level that warrants realistic expectations of winning the conference tournament.”

The IIAC Championships will span two weekends. The April 20 through April 21 meet will be held in Iowa City, while Dubuque will be the site for the remainder of the championships on April 27 and April 28.

Having already won an IIAC Championship last fall, the women’s golf team is preparing for the NCAA Championships. After the Mount Mercy Invitational in Cedar Rapids on April 16, the next stop for the team is Howey-in-the-Hills, Florida. The national championships are scheduled for May 8 through May 11.