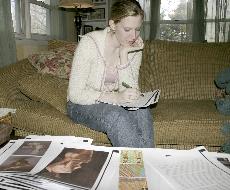 Every year, Simpson College publishes its literary and arts magazine, “Sequel.” Anyone within the Simpson community is welcome to submit their work, whatever it may be, for judgment.

Besides cash awards that are given to the top literature and art pieces, as well as the great chance to showcase talent, “Sequel” offers other great opportunities to those involved behind the scenes.

“This magazine offers an opportunity to learn for students,” senior Editor-in-Chief Jennifer Allan said. “Producing a literary and art publication is very different than that of a newspaper or newsletter.”

The concept behind “Sequel” ties in very well to what Simpson College represents and is really all about.

“Since liberal arts are the emphasis of Simpson College, this magazine is a major publication that can be showcased in Simpson’s fostering of creativity,” Allan said.

A lot of hard work and time goes into putting the entire magazine together.

Senior Rebecca Weaver, who as the art editor is in charge of putting all literary and art work into the magazine, knows this and found this year to be very successful.

“It was a lot of work, but I enjoyed doing it,” Weaver said. “We had a good staff this year, especially the art staff.”

Allan also notes that the process is very long but the result makes it all worth it.

“During fall semester, we usually advertise the magazine and try to get campus awareness up,” Allan said. “Spring semester is crunch-time so there is a lot to vote on the last few weeks.”

There were many positive changes to the production of “Sequel” this year that made the entire production process run smoothly. SGA had a major role in these changes

“Thanks to the increased funding from SGA, we could use a larger format, which enabled the magazine to include many more pieces this year than in previous years,” Allan said.

Weaver agrees that the larger format was very beneficial.

“This was the first year we had a full-page spread,” Weaver said. “This enabled us to put many more works into the book.”

Even with a larger format, the increased amount of submissions required more changes so more work could somehow be represented.

“Since all the pieces the staff wants to publish cannot fit into the magazine, we have utilized the new website to display some of the pieces,” Allan said. “While this is not ideal, it still allows this organization to represent as many members of the Simpson community as possible.

Students, faculty and staff alike equally participated in submitting works to “Sequel” this year. Those who are on the “Sequel” staff are also welcome to submit work. Sophomore Jackie Suckow who is on the staff, was one participant.

“I submitted a black and white photograph,” Suckow said. “It was one that I really liked that I thought would get in.”

April 12 “Sequel” will present its 2006-2007 publication as well as the winners of the literary and visual art awards.

“I hope there will be a large turnout,” Weaver said.