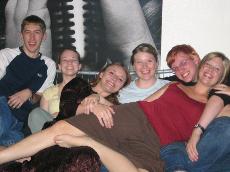 The Performing Arts Theme House is still waiting to find out exactly where the students will be living next year.

The residents of the house are currently living in the house at 510 Detroit St., a home that has traditionally been rented out to faculty members. It was moved to Detroit Street at the beginning of the semester because of problems with their previous house.

When the time came to re-apply for theme houses in February, residents of the house expressed their interest in staying in the house on Detroit Street. However, they were told that option may not be a very likely one. Because the house is not student housing, Residence Life could not assign the house to students.

Members of the house then expressed interest in the current political science theme house, located at 707 North C St.

“We indicated interest in the political science house because we didn’t want to go into the summer without housing for next year,” sophomore Jacob Kaufman said.

At the end of the theme house application process, members of the house received confirmation that their housing assignment would be in the current political science house, which meant the house could grow from six residents to eight.

Currently, the Women’s Resource Center is set to be located in the political science house. Stephanie Krauth, associate dean of students, said the house was chosen because of the layout.

“This house had a layout that was more conducive to a center environment,” Krauth said. “There could be a better distinction between the living space and the actual center.”

Mandy Fox, director of residence life, said the idea of the Women’s Resource Center had been discussed at length prior to the theme house application process.

“Nothing was able to be pulled together by when we had requested a decision, so we moved forward with theme house and room selection,” Fox said. “However, a decision to go ahead with the women’s center was made after all the housing-selection processes were over.”

“The two houses are tied together,” Fox said. “If one option doesn’t happen, the other one will.”

If the PA house remains at 510 Detroit St., the number of residents will have to be reduced. The house could be made a seven-person house if residents want it to be. This means at least one of the extra students would need to make other housing arrangements or go back to their original housing assignments.

Because the idea for the Women’s Resource Center came up so late, there was some miscommunication between Residence Life and the PA House.

“It was not Mandy Fox (director of residence life) and Stephanie Krauth’s (associate dean of students) intention to keep us uninformed,” junior Angela Vogel said.

Vogel will serve as house manager for the performing arts house next year.

Fox said Residence Life will have a final decision for both groups on April 20.