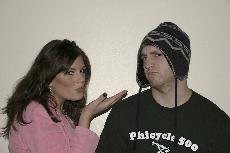 I’ve been dating this guy for two years and we’re talking about moving in together for the summer. I’ve been having second thoughts about it and I don’t know how to tell him that I think we shouldn’t live together after graduation. How should I tell him my thoughts?

What are you scared of? More sex? Haha just joking. Maybe that’s not your thing.

I think it’s completely natural to have these feelings. You just gotta be honest with him. Lay it all out there for him.

However, you better have some legit reasons as to why you don’t want to live with him or he’ll probably freak out!

One reason could be that you just don’t want to live him. Be honest and let him know you don’t think it’s the right time to make that big of a commitment.

I mean honestly, I know some high school aged people that have dated for longer than two years. However, after their junior year of high school they didn’t move in together. Obviously, those are different situations, but you get the idea.

You can plan for the worst and hope for the best. What’s the worst that could happen? He might break up with you, right? But are you going to let some guy break your heart just because you didn’t want to move in with him? DUH, NO is the answer.

Tell the man to get serious and if he really does love you than you both can work it out to make things run smoothly without living together.

Or what would be really awesome is you could lie to him. From my dealings with former partners, I find that lying seems to be a sweet trend amongst them. Now the tables are turned. You could finally be the bad guy for once. I don’t know if, I Zach Rus, could personally handle doing it, but sure, if you’re a heartless bitch go for the gold! No skin off your back, right? Or mine for that matter.

Honestly, do what you think is right. Just tell him what you’re struggling with and if he doesn’t understand, well you know…peace out mangy man.

You didn’t share your reasons as to why you’ve decided against this move. If it’s just because you’re not ready or don’t want to live with someone before marriage, just share whatever your concerns are with him. Though he might be hurt and upset by your sudden change of heart after two years together, I’m sure he also knows you pretty well and respects you. Most likely he’ll come around and honor your wishes.

Moving in together is a big step. There is no fast rule as to what is the best choice for each couple. Though the modern trend is to live together, it doesn’t have to be in your situation.

Many young couples choose to cohabitate for financial reasons. It makes the transition of family dependency to graduation independency easier when you have someone to share the bills with.

Also, many young people choose to wait until later in life to marry due to higher education, so living together is like the sample platter of marriage.

Though this decision seems easy to some people, I know from first-hand experience it can be tricky. This dilemma pulls you in many directions. If your heart isn’t fully into this situation you shouldn’t do it. Just because you don’t move in together right after graduation doesn’t mean you can’t decide to try it out later. Don’t just move in with him because it would be easier then confronting the situation.

By putting off your feelings now, it will only cause larger problems in the future.

Whatever you decide, make sure you talk with him about it. Maybe by talking about it, you’ll get to a place where you can figure out alternatives to your situation.

Maybe getting those his and hers towels for a graduation present wasn’t the best idea, but hold onto them. They may pay off in the future.