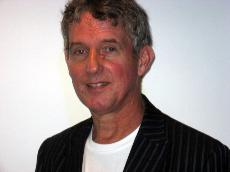 Among the new faces on campus is the newest edition to the Communication Studies Department, Marty Feeney, visiting associate professor of communication studies. The Boston native graduated from Boston College with bachelor’s degrees in both communication studies and theater. After completing his degrees, Feeney proceeded to acquire a master’s degree and a doctorate from Bowling Green State University.

Feeney had been teaching at Central College in Pella, Iowa for the past 21 years when an immediate opening at Simpson came. Brian Steffen, professor of communication studies, was the person who originally alerted Feeney of the opening and is glad that he did so.

“I really like the totally non-corporate climate that Simpson has,” said Feeney. “The small school feel is great and I sincerely think that Simpson is a friendly place. I’ve had many face-to-face introductions by other faculty members and its extraordinary how welcoming that is.”

Feeney brings along with himself a unique teaching style that is based off of Jim Carey as a role model.

“I look at teaching as a performance, especially in my 8 a.m. classes,” said Feeney. “I try to create the illusion of spontaneity, even though I do know what I am doing.”

When Feeney isn’t teaching in a classroom, he enjoys many other hands-on activities. One of his passions includes being a short filmmaker His films are typically parodies ranging from 2-12 minutes in length. Feeney draws his inspiration from performers such as John Stewart and David Letterman, two of his role models. Feeney also enjoys competing at the master’s level in the Iowa Senior Olympics. Feeney is very active and is good at what he does, proving so by medaling in 11 of 15 events in his last competition.

Already Feeney has had positive experiences in the classroom with Simpson students and looks forward to more in the future.

“Students are very responsive and involved,” said Feeney. “I’m have a good time.”