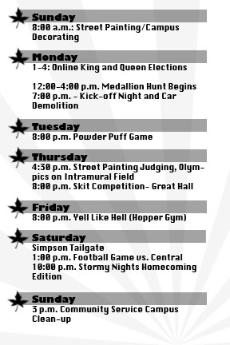 The first week of October will be a busy one for many student organizations participating in Homecoming.

The theme for this year is “Picking’ Tulips and Takin’ Names,” in honor of the football game against Central. But before the game takes place on Saturday, there will be a host of events taking place that will bring the campus together.

To kick off the week, there will be a ceremony in front of College Hall where the Homecoming Committee will announce the 2007 court candidates. There will also be representatives from all fall athletic teams including football, volleyball and soccer. The ceremony will then move to the Circle of Knowledge in front of BSC for a car demolition.

Sophomore Homecoming Chair Steve Lovitt is happy that the committee wanted to mix things up this year and stand out. Lovitt also mentions that many other organizations will help sponsor events taking place during Homecoming week.

“We tried to make more events to involve the whole campus,” Lovitt said. “We have the Simpson tailgate sponsored by PRSSA and CAB sponsoring Stormy Nights for the weekend.”

Also coming back from a year hiatus is street painting near Picken Hall. The event did not happen last year, but sophomore Homecoming Chair Amanda Yanchury is excited to bring the activity back.

Yanchury also mentioned how important it was for this year’s Homecoming celebration to not be surrounded by recent offensive remarks toward Central College.

“We just brainstormed ideas that were not focused on the ‘FTD’ slogans,” Yanchury said.

Recent e-mails have been sent by faculty members and students about holding Simpson to a higher standard and the committee feels that it is important to change the focus of the Homecoming game, rather than focus on previous actions.

“It makes our college look bad and we wanted to be better than that,” Lovitt said. “We wanted to keep up Simpson’s quality and show good character.”

Besides the opening ceremonies and street painting, the week so far has a full schedule and many ways for organizations to get involved. There is a powder-puff football game sponsored by SGA scheduled to take place on Tuesday, Oct. 2. There will also be a medallion hunt where students will receive clue e-mails and teams will have to figure them out. The reward will be undisclosed prizes as well as preferred seating at the football game.

The committee also felt that it was important to span out events throughout the week instead of having them all occur on Saturday.

Many Greek organizations have already signed up and are planning their skits and routines for Yell Like Hell, which will take place on Friday. The women’s basketball team has also showed interest in participating in the festivities.

Sophomore Alicia Fischer participated with the team last year as a freshman and is excited to see what will happen this year.

“I thought it [Homecoming] was fun for us as a team,” Fischer said. “It was a chance for us all to be together before the season actually started.”

Another member of the women’s basketball team, junior Laura Montague, participated with the team last year and saw it as an experience that brought the team closer together.

“It was a good bonding experience for us,” Montague said. “Having to come together and work on something like this [dance routine] helped us form bonds in different ways.”

Montague also mentioned that the experience from last year was very much welcomed by Greek organizations who normally dominate the activities. This year, the team plans on participating in all of the Homecoming week activities.

Lovitt hopes that everything runs very smoothly this year and that everyone has a good time ad well as a high amount of school spirit.

“I just want everyone to be excited- it’s homecoming!” Lovitt said.