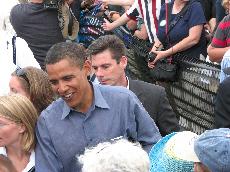 With a record-setting turnout, its no wonder that several candidates at Sunday’s 30th annual Harkin Steak Fry compared the landscape of the event to the “field of dreams.” According to Jesse Harris, a representative with Citizens for Harkin, the event drew in more than 14,000 enthusiasts.

All candidates expressed ways in which they felt the country needed to change, with universal themes of a desire for troop withdrawals from Iraq and ideals to create a unified health care system in America.

Obama, the first presidential hopeful to address the crowd, expressed goals for an end to U.S. troop presence in Iraq, and pledged to work on the problem in his current position.

“We are going to bring an end to this war,” Obama said, “and I will fight now in the United States Senate to make sure that we don’t pass any funding bill that does not have a deadline…to start bringing our troops home.”

Edwards spent time in his remarks voicing his opinions on health care.

Laying out details for a plan that would create “mental health clarity,” coverage of long-term and chronic care and allow for Americans to “take your health care with you wherever you go,” Edwards admitted his tactic would come at a cost.

Clinton also addressed a demand for an end to the Iraq war and a need for a cohesive form of health care coverage. The former First Lady also made a reference to reforming education. While mentioning that the change needed to begin with universal free kindergarten and a reform of the No Child Left Behind policy, Clinton made mention of the need to address cost issues for individuals seeking a higher education as well as job opportunities for those who don’t.

“We’re going to make college more affordable and we’re going to give young people that don’t go to college a chance at a better future with skills training and apprenticeship programs,” Clinton said.

Richardson also weighed in on higher education, offering a service-oriented program to alleviate debt for graduates.

“We need also, as America, to recognize that today there are rip-off artists taking over the college loan program,” Richardson said. “Here’s my plan to deal with college loans. In exchange for paying off a good part of your college loan, all young people give one year of national service to America…Find a way to give something back to America.”

Senior Ben Williams, a co-president of the College Democrats, shared his thoughts on Richardson’s plan.

“He was a little short on specifics,” Williams said, “Which was OK, it wasn’t a major policy speech. He did say students would have to pay a large amount of loans back. I don’t think it’s a free pass… but I think it’s a wonderful idea for the government to ask young people to contribute when we’re willing.”

“Many people had tooted Obama’s horn for his speaking ability,” Ramsey said.” However, I was not overly impressed. I believe Hillary took the speeches for the day. All of them were in some way dynamic. However, I only keened in on Obama and Hillary.”