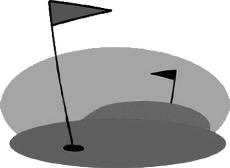 The Golf Classic, which is sponsored by the athletic department and the Gold Club, is an opportunity to raise money for the athletic department. Golfers played 18 holes, had the opportunity to purchase raffle tickets for prizes, participated in a silent auction. Participants also had the chance to take part in numerous golfing contests including a hole-in-one contest, longest putt, and longest drive. A dinner and banquet followed the two-person best-ball tournament.

What students may not realize is that Simpson athletes reap many of the benefits of the tournament.

“[The purpose of the event] is special funding that we like to do in the athletic department that goes directly back to students,” said Lana Smith, senior women’s administrator and head volleyball coach.

The tournament has grown tremendously from its first year in 2000. According to Sirianni, the first year the Golf Classic took place there were about 60 golfers and approximately 20 sponsors.

This year, almost 140 golfers participated, nearly 200 people attended the banquet, and there were approximately 50 different sponsorships.

Along with an increased number of participants this year, came an increase of profits as well.

“We made seven times more this year than the first year,” Sirianni said.

The tournament is named after Wayne Carse, a 1950 graduate of Simpson College. Carse is a self-made business man, who was born in western Iowa and was a member of the Simpson College basketball team. The Carse Fitness Center on campus is also named after him.

However, the tournament did not start out as the Wayne Carse Golf Classic. It was originally called the Fun Fest Golf Classic.

“After he’d been so supportive to us we decided to name [the tournament] after him as a thank you.” Sirianni said.

There are numerous ways in which Simpson encourages involvement in the tournament.

“We send out notifications, save the date reminders, advertise in the Record Herald and golf courses throughout Iowa,” Sirianni said. “We also actively pursue and invite people who it’d be important to get there.”

Assistant Athletic Director Ron Peterson stated that there are other ways to participate besides golfing in the tournament.

Peterson also explained that there are several ways current students can become involved with the event including making party favors such as golf balls and tees, helping the day of the event with the registration table and contests, meeting and greeting participants and working as a caddy.

Peterson also stated that students can help spread the word throughout the year.

“Students could promote [the tournament] on a year round basis,” Peterson said. “That would be a great thing.”

Smith said that there is a committee that is involved in the planning of the tournament. Coaches and Simpson faculty are on the committee, but it is not limited to Simpson College staff.

“People within the community are involved as well,” Smith said.

There were many prizes given away at the tournament. Some of the top prizes were a one week vacation in Belize, a Lexus SUV for the weekend, dinner with Casey Blake and his wife and two tickets to the Notre Dame vs. Southern California football game with a hotel room for two nights. All of the prizes given away were donated by sponsors.

The most popular prize, however, is a dinner prepared by President John Byrd and Nancy Byrd, John and Ginger Sirianni, and Bob and Sharon Sallee. The dinner takes place at Byrd’s home, where they plan a multi-course meal.

“Our wives cook and we’re the waiters,” Sirianni said. “It’s been a huge success.”

Members of the committee have already begun thinking of ways the Wayne Carse Golf Classic can be improved for next year.

“Our goal is to always make it one step better than the year before,” Peterson said.