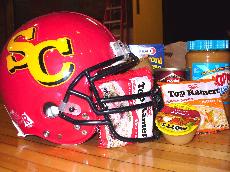 The Simpson football team is working hard on and off the field. Former defensive line coach Paul Davis is heading up a new program called Helmets for Hunger.

The football team asked for Simpson students, professors and faculty to bring in canned foods to the football office during Homecoming Week and to Yell Like Hell on Friday night. This year, there were 370 cans of food collected. All of the cans collected were donated to Helping Hand, an Indianola food pantry.

This is the first year for Helmets for Hunger and this year the goal was mostly to get the word out about it.

“We want to make it an annual event,” tight end coach Nathan Seberg said. “This year we want to get the word out about hunger in Iowa. A lot of people in Iowa don’t think we have issues with hunger, but we do right here in Warren County.”

Coaches asked that each of their players bring in three canned food items to help get the program started.

Simpson is not the only school participating in this program. Davis has Helmets for Hunger set up at four schools in Warren County.

“There are four schools in Warren County participating,” Tubaugh said. “Each team takes a different week and tries to collect the most food. This week it was our turn.”

Linebacker coach Kevin Ferguson is excited about getting this program started at Simpson.

“So far everything has gone really well,” Ferguson said. “We are getting good feedback from the campus.”

The football team is not only working hard to help out hungry families in Warren County, but also working hard during practice and games.

The men are currently 2-4 and 1-3 in the Iowa Intercollegiate Athletic Conference. The Homecoming game against No. 7 Central was a close one. The Storm nearly pulled off the upset, losing 28-21.

The football team has this Saturday off before hosting Cornell with a night game on Oct. 20. Cornell is currently 2-3 overall and 0-3 in the conference.