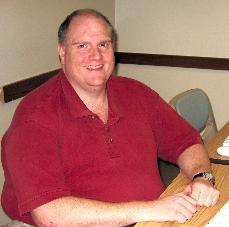 Behind the scenes of the Information Services Department is Academic Software Specialist Chuck Johnson.

“I first started out with engineering, and after that didn’t work out I decided to take a computer science class,” Johnson said. “I did well and I enjoyed it, so that’s where I started with my interest in computers.”

Johnson later moved to Iowa and has been working for Information Services at Simpson since May 1998.

“I provide support to faculty, staff and students on software packages used in classes and labs,” Johnson said. “I also purchase, track and manage software licenses, administrate web applications such as WebCT, Moodle, and regulate Simpson’s web servers and the portal ensuring that the software is kept up to date. Basically anything that has to do with the web, I’m involved with in someway.”

While Johnson will be the first to admit that you can always find him working on something at Simpson, Johnson also finds time for such hobbies as hiking, photography and woodcarving.

“Recently, a friend of mine and I went to the State Fair and looked at the woodcarving exhibits,” Johnson said. “I always knew I had a great interest in it.”

The reason that Johnson has stayed at Simpson for the past nine-and-a-half years is because of the faculty and students.

“I like working with the people,” Johnson said. “It’s not the job; it’s more so the people that you work with.”

Along with the people, Johnson also enjoys the extra opportunities given to him by Simpson.

“It’s nice to have different opportunities to take advantage of,” Johnson said. “I really like going to all of the different forums and musical events on campus.”

Overall, Johnson is good at what he does for Simpson; even the students that he has worked with can agree with that.

“I did work study for Information Services for one year,” sophomore Amit Singh said. “Chuck takes care of all of the Mac’s on Campus. He knows what he’s doing, and he’s good at his job.”