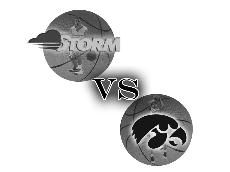 On Nov. 1, the Simpson men’s basketball team will take on the Iowa Hawkeyes in a preseason exhibition game at Carver-Hawkeye Arena. This is not an out-of-the-ordinary practice for Iowa; for the past couple of years, Iowa has picked a school from the Iowa Intercollegiate Athletic Conference to face in one of their preseason match-ups.

From the outside looking in, it may seem like a simple match-up of David versus Goliath. But when you take a closer look, there are several incentives for taking on a Division I opponent.

“It seems that wherever I’ve been, there’s a real incentive to play against the best teams,” Head Basketball Coach Bruce Wilson said. “When you play a team like this, you’re going to face some big guys that are pretty good athletes. You really have to have a good game plan, you really need to execute well and just try and keep them away from the basket.”

The game is more than just a chance for the players to go up against big-time competition. With the game being broadcast, Athletic Director John Sirianni notes it’s a great opportunity to get the program some exposure.

“With the game being on television, visibility is a real incentive for a game like this,” Sirianni said. “After we played Drake a few years ago, I had people commenting to me several years after the game about how well we had played against Drake and about the quality of our program.”

Even though the Storm will be facing a team with talent that is superior to the teams they will face during their conference season, that won’t change the way they are preparing for the game.

“Our goals for this game are just like any other,” senior guard Brennen Tubaugh said. “We know we have to play hard, execute the game plan that the coaches put in front of us and believe in ourselves. Every game we play in, our goal is to win the game. We aren’t going to Iowa City to roll over; we’re going to compete and to win the game.”

Despite Tubaugh’s seriousness about the game, he says he’s still excited to go up against the Hawkeyes.

“When coach told me that we were playing Iowa I was excited. I’m a fan of the Hawks and this is a dream come true to be able to play against them.”

The players are also excited to mix it up against some of the big men at Iowa as well.

“I am looking forward to going against all of their post players,” junior center David Ferezy said. “Seth Gorney is probably the one player that I am most excited to go against because I have always had success playing against people taller than me in the past.”

There are indeed some long odds against the Storm. Most expect Iowa to not just win, but win big. Despite this tough test, Wilson makes it evident that he still expects his players perform well in this contest.

“You always have to go into a game expecting to win,” Wilson said. “Otherwise you might as well not even show up.”