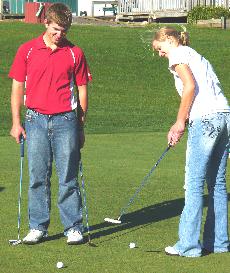 At the end of the first two rounds of the women’s Iowa Intercollegiate Athletic Conference tournament the Storm women found themselves in third place behind Wartburg and Loras.

The Storm were only five strokes out of second place after the first weekend of the tournament held at Pheasant Ridge Golf Course in Cedar Falls.

Sophomore Megan Smith led the Storm and was fifth overall. Senior Noel Treibel was sixth after the first two rounds

Treibel said that although putting was the part of her game she needed to work on after first two rounds, the team needed to be able to battle back from adversity the last two rounds of the tournament at the Meadows Golf Course in Asbury.

Smith concurred with Treibel saying that putting was something that needed to improve if the Storm wanted to catch up to Wartburg.

“The work around the green is going to be really crucial in the last two rounds.” Smith said.

Treibel also said that overlooking a couple of the teams heading into the tournament might have been the reason why they were third behind Loras after the first weekend.

“We were kind of surprised that Loras and Luther finished ahead of us the first day. They kind of came out of nowhere this year,” Treibel said. “We didn’t take those teams into account which was our fault

Despite sitting in third after the first two rounds, the team knew that the change of venue for the last weekend of the tournament could very well shake things up in the standings.

“Even though Wartburg has a strong lead after the first weekend, anything can happen,” sophomore Katie Vaux said. “Especially at the Meadows Golf Course, because it will challenge even the best golfers in our conference.”