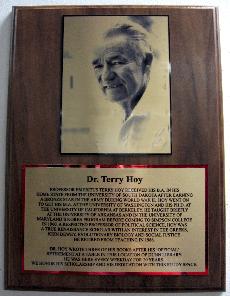 A new study room in Dunn Library has been dedicated to a former professor who passed away May 2, 2007.

The Hoy Study Room is named for the late Dr. Terry Hoy, and was the idea of Cyd Dyer, college librarian and archivist.

“I asked the Academic Dean for permission,” Dyer said. “I received thanks from several faculty members when the announcement of the dedication was made.”

According to Dyer, Hoy was a frequenter of the library, and the location of the study room has a special significance. The room is located where Hoy worked at a table every weekday for 20 years after his retirement.

Prior to joining the faculty of Simpson College, Hoy taught at the University of Arkansas and lectured in Korea for the University of Maryland. Hoy also served in World War II as a member of the famous Merrill’s Marauders, a group that participated in dangerous action behind Japanese lines in Asia.

Hoy joined the Simpson community in the fall of 1960 as an assistant professor of political science. He also served as chair of the Department of Political Science for several years.

“We had a very public argument about the Vietnam War,” Duncan said. “And we argued for many years after that.”

According to Duncan, Hoy was an idealist, and thought whatever was reasonable should have been done.

After his retirement in 1986, Hoy was unanimously approved to receive professor emeritus status by the Academic Affairs Committee and the Board of Trustees.

According to library staff, Hoy spent the last 20 years researching and writing at the same table in the back of the library. After retiring, Hoy had more time for deep thinking and other scholarly pursuits such as writing books, articles and giving presentations. Hoy wrote three books at his table in the library.

Business Acquisitions Manager Terry Trunnell said she worked with Hoy for many years.

“The first time we met was when I worked in another department,” Trunnell said. “I typed his notes up for him, and it was really hard to read his handwriting.”

“He ordered books for his research almost every day,” Ellingson said. “We also talked about a lot of different things, like how we both grew up on a farm. We talked about current events, and he also liked to tease a lot and give hugs.”

Ellingson also said Hoy did not like computers. She said she set up a Hotmail account for him to use in his correspondence with publishers, but that was the only time he used a computer.

Duncan said Hoy was a man of habit, and he made a positive contribution to the campus. He also believes the study room is a great idea.

“He was an example of a person that was committed to academic life, and he stimulated thought here,” Duncan said. “He was a very humane person, and tried to support good causes. He was also a good friend.”

Dyer said Hoy was a fixture in the library, and he will be missed.

She also encourages students to use the new study room, which now has a whiteboard.

“Dr. Hoy was a consummate scholar, and he was almost a part of the library staff,” Dyer said. “We will miss him a lot.”