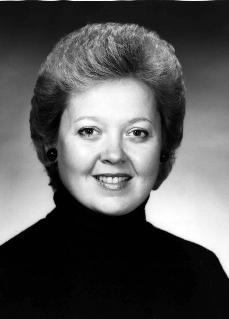 On Oct. 6, students, faculty, alumni and supporters of the Department of Music gathered in Great Hall for “A Concert for Anne.” The concert, which featured performances by alumni and the Simpson College Choir, was held to commemorate Anne Ogan Larson, a longtime voice instructor who passed away in 2006.

Professor of Music Robert Larsen, a good friend of Larson, served as Master of Ceremonies. Near the close of the concert, Larsen announced that a donation in the amount of $500,000 had been made in memory of Larson.

The donation, made by John and Doris Salsbury, created the Anne Ogan Larson Endowed Music Scholarship Fund, which will provide scholarships to incoming students planning to major in voice or piano.

Larsen said he learned of the Salsbury’s interest in making a donation last spring. Bob Lane, vice president for college advancement, said his office received the check only a few days before the concert.

“The donors wanted to make sure it was announced when all of the alumni were back for Homecoming,” Lane said.

According to Lane, the scholarship was established in Ogan Larson’s name with the notion that it will help the music department recruit and retain talent.

“The scholarship will help us be more competitive, because it goes above and beyond regular college scholarships,” Larsen said. “It will allow us to recruit more students with extraordinary talent that also have many opportunities at other schools.”

Lane did not have an exact amount for how much of the scholarship money would be given each year. That amount will depend on the number of students recruited by the Music Department and the spending rates for endowment funds set by the college’s board of trustees each year.

“The money for endowed scholarships is invested, and the college only spends a percentage of the earnings each year,” Lane said. “But based on the amount of the donation, there should be multiple scholarships available each year.”

Lane said endowment funds are a way to ensure that scholarships will be available as long as the college exists, and it was a way for the Salsburys to ensure Ogan Larson’s memory would live forever.

According to Larsen, the Salsburys and Ogan Larson were good friends, and they recognized and admired her for her work and as a person.

“It was a very natural thing for them to want to do something in Anne’s memory,” Larsen said. “It seemed very appropriate to create an endowed scholarship because the Salsburys have always been interested in students at Simpson.”

Faculty and students said Larson was a remarkable person with great talent and an interest in her students.

“She always made it a point to say ‘hello’ to you in the hallway,” Jacobsen said. “She was a phenomenal person that radiated a unique love for teaching and music.”

Jacobsen is amazed at the amount of money donated in memory of Larson.

Larsen said Larson had remarkable vocal gifts, and it was clear from her beginning at Simpson that she was an excellent teacher.

“She is very much a part of the musical tradition here at Simpson,” Larsen said.

Maria DiPalma, chair Music Department, is thrilled that the Salsburys chose to honor Larson’s tenure at Simpson by giving the scholarship.

“It will help to perpetuate her legacy of outstanding graduates,” DiPalma said.

Lane said the college is grateful to the Salsburys for their generosity and support of Simpson and the music programs.

“The scholarship show the Salsbury’s affection for the college and the Music Department,” Lane said. “It is a wonderful tribute to Larson.”