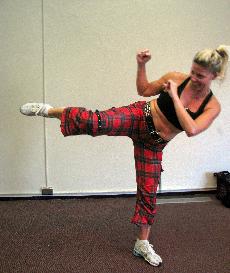 Simpson College intramurals has added a new class for the fall. Nicole Darling, assistant director of student activities and intramurals director, offers some sort of aerobic class every semester and this year it is a turbo kick class.

The class takes place in Camp Lounge at the Brenton Student Center on Monday nights from 5:30 to 6:30. Unlike most intramural events, this isn’t a competition. People can come just for the workout.

Turbo kick is a high intensity aerobic workout. People who attend have a tendency to perspire a little bit.

Junior Carrie Larson witnessed just that when she went to a class.

“It was a great workout,” Larson said. “Everyone around me left pretty sweaty.”

So far the class has been a success. The first class had 49 people attend and the second class had about 30.

“The first class had so much interest that a few people were waiting outside of Camp Lounge,” Darling said. “We didn’t have enough room and had to turn some people away.”

Junior Laura Montague agreed that things got a little cramped.

“There were a lot of people there, it was pretty crowded up in Camp Lounge,” Montague said. “It was hard to kick around and have enough room to do all of the moves because there were so many people there.”

There is typically some kind of aerobic class offered in the fall and this year Tiffany Koenig, instructor of the turbo kick class, contacted Darling and asked if she could teach a class. Koenig provides a lot of positive energy during the classes.

“The instructor was very into the class,” Montague said. “She did a great job of trying to make it fun for everyone and was very high intensity.”

Although it is a high intensity class anyone can attend. People can work at their own pace while they learn the steps.

“It was definitely hard,” Larson said. “It took me a while to catch on because the instructor was going at a pretty fast pace.”

Montague will attend the class again this semester.

“I would definitely go to the class again,” Montague said. “It was a lot of fun. I think I would be more likely to attend the class again if friends were to come with me. It is fun to work out with Carrie.”

Due to the high attendance numbers Darling is now offering the class on Tuesday and Thursday nights.

Senior Tracy French would also like to attend the class in the future.

“I haven’t been able to attend the class yet,” French said. “However, I think it is great that Simpson is offering aerobic classes on campus as an alternative to just going in to the weight room.”