Reflecting from the Hill: Why more students need to work in Washington 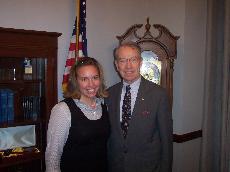 About six weeks ago, I was featured in The Simpsonian, talking about the semester I am experiencing as part of the Capitol Hill Internship Program, known locally as “CHIP.” With a scant three weeks left, I’ve come to the conclusion that CHIP is something every Simpsonite should think about doing.

Before you start to protest, saying you’re not a political science major, stop. I’m going to explain to you what I think are the top reasons to participate in CHIP.

The story of CHIP is simple: Eight years ago, Nebraska Wesleyan decided they wanted to start a program to have students come to Washington and experience living and working there. After looking at how expensive Washington was, they decided to invite other Methodist-based colleges (Simpson included) to pool their money, lease a house on Capitol Hill and start a consortium.

The house is on Capitol Hill, and for the last 15 semesters (and every summer) these schools fill it with students. The idea is simple- students live in a group home, take two classes together and work four or five days a week.

To be part of CHIP, you first talk to your adviser and figure out your schedule. You then proceed to talk to political science professor, Dr. John Epperson, the CHIP representative at Simpson. Dr. Epperson will help you apply. Once accepted to CHIP, you start looking for an internship.

It seems every single place in Washington takes interns. There are literally thousands of jobs just waiting for you.

Washington has a reputation as being an expensive city. Through CHIP, you pay tuition to Simpson, but instead of paying room and board, you pay about $3,000 to CHIP to live in the house for the semester.

Any other expenses you accrue are things you are responsible for. It should be noted that, as far as entertainment is concerned, Washington is a cheap city. The monuments are free. The Smithsonians are all free. It’s not hard to spend a semester here without bankrupting yourself. Also, there are a lot of grants for people who are spending a semester being paid poorly. Look for them, there is money out there to help you.

Reason number three: Washington is the most powerful city in the world.

Washington is full of people with the ability and desire to change the world. If you like being in the middle of everything, Washington is the place for you.

While an intern, you may get to know the front desk phone or copy machine better than you would like, but you are still helping important things get done.

In the time that you’re not making copies, go watch a hearing. Go see the Dalai Lama receive the Congressional Medal of Honor. Go watch a case argued in front of the Supreme Court. Everyone says that your internship is what you make it, and I could not agree more.

It’s also important to remember that almost everyone started as an intern. When Senator Clinton was Hillary Rodham, she interned in Washington, as did her husband, to name only two. That being said, interning is a great way to get your foot in the door to unlimited connections.

Even if you do not have political aspirations, working in Washington will connect you to a whole different world than one you have ever seen.

In Washington, everyone knows someone who knows someone. This makes forming connections very easy. If you want to go to graduate or law school, congressmen write pretty good letters of recommendation.

Reason number four: There’s something for everyone in Washington.

It’s a common misconception that Washington is just for people who study political science. This is untrue. There are so many majors that you could have and get a great internship.

I’ll give some examples: any kind of business or finance scholar could work with the International Monetary Fund, World Bank or Federal Reserve, or the dozens of lobbying firms that reside in fancy buildings downtown.

A foreign language major? There are over 170 embassies in Washington, all of whom take interns.

Are you a sociology major? What interests you most? Washington is full of nonprofits doing everything from securing America’s water supply to ending sex trade. These examples stand by themselves, without considering the 535 congressional offices, any of their committees, or the countless think-tanks.

While these are by no means all of the reasons why Washington is a great place to come and be young, it is a start. I encourage anyone who has ever thought about studying somewhere else to explore being part of CHIP. We’ve got housing, we’ve got job possibilities and we’ve got roommates. Now, all we need is you.