Twins at Simpson team up in athletics 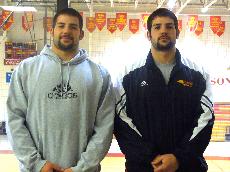 If you thought a couple of football players this past fall looked pretty similar, you were right. Or if you think your eyes are playing tricks on you next time you attend a wrestling meet, don’t, for Simpson currently has twins participating on the same athletic teams this year.

Juniors Luke and Tim Stover, identical twins, have participated on the Simpson football team for the past three years. According to Luke, the decision to come to Simpson together was mutual.

“We both liked Simpson so we decided to come here,” Luke Stover said.

Unlike other athletes on the team, Luke and Tim have been fortunate in having a teammate for life. For as long as they can remember, they have been playing on the same team.

“I like playing with him [Tim],” Luke Stover said. “I’ve played with Tim my entire life. All the sports we’ve ever played we’ve done together.”

Tim Stover believes the decision for twins to attend the same college depends on their relationship.

“It depends on how close they are with one another,” Tim Stover said. “For us it was a good decision.”

When Luke and Tim Stover are not in uniform, without their jersey numbers to tell them apart, people who do not know them personally might find it close to impossible to tell them apart. Tim said that teammates and coaches sometimes have a difficult time telling them apart as well, but eventually they can tell a difference.

“Most coaches and teammates can tell us apart,”

Tim Stover said. “Especially the upperclassmen. Freshmen sometimes have a hard time, though.”

Tim Stover also said there are certain clues that can help others tell them apart.

Sophomore twins Curtis and Calvin Barber are both wrestlers for the Storm this year. Unlike the Stover’s, they originally went to different schools their freshman year. Calvin transferred from Buena Vista University this year, reuniting the two as teammates once again.

The decision to go to separate schools their freshman year was not accidental, according to Calvin Barber.

“We planned it,” Calvin Barber said. “We wanted to be on our own.”

Even though their original plan was to go to separate colleges, they both agree they like being teammates again.

“It’s great to be on the same team as your twin,” Calvin Barber said

“It makes me go harder,” Curtis Barber said. “I’m kind of in his shadow so it makes me work up to him.”

As for difficulty telling the Barber’s apart, Curtis Barber said that some people have a difficult time, but there are certain features about both that could help fans tell them apart during a meet.

“We have different wrestling shoes,” Curtis Barber said. “Calvin also has a tattoo.”

Off the wrestling mat, Curtis Barber said their friends can usually tell them apart pretty easily.

“We have different personalities,” Curtis Barber said. “Friends can tell us apart by the way we act and talk.”

Twins can also be found on the hardwood this winter, where freshmen Matt and Dave Fouch will participate in basketball. Sophomore Ryan Napoli is another twin that will be participating in athletics this winter. His brother, Robby Napoli, played football for the Storm this fall.