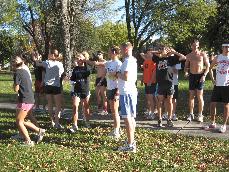 The Simpson men’s and women’s cross country teams both finished fifth at the Iowa Intercollegiate Athletic Conference Championships on Oct. 27 in Dubuque. They now will both compete in the NCAA Regional Championships on Saturday, Nov. 10 at the St. Olaf Cross Country Course in Minnesota.

Freshman Catie Ellingson earned All-Conference honors and finished 10th at the conference meet. She said that she was pleased with how the team finished, but also felt that they had the opportunity to place higher.

“I think we could’ve done better as a team,” Ellingson said. “We all thought that.”

“It wasn’t what we wanted,” Salberg said. “We were disappointed, but we have to look at the year as a whole, not just with our conference finish. We had an awesome year, and I’m proud of our team even though we weren’t happy with how we finished in conference.”

Simpson finished four of their six meets in third place or better this season, including a win at the Central Invitational to open the 2007 campaign.

Salberg was the only senior on the women’s team this year. She said that the younger team members did very well in adjusting to their new roles on the team.

“The sophomores really had to step up and take a leadership role since there aren’t any juniors on the team,” Salberg said. “That’s a big adjustment from being a freshman [the year before] and they did a great job with that.”

With the regional meet only two days away, Ellingson said they have been training hard and focusing more on speed work in order to be prepared. She said they are ready to compete and do their best.

“We’re just going to try and run our best,” Ellingson said. “We have tough competition.”

Salberg also has expectations for the regional meet.

“Our goals are to place higher than we did last year as a team and have everyone do their best individually,” Salberg said. “That’s always a good way to go out.”

The men’s team is led by junior Eric Osterhaus, who earned All-Conference honors and finished seventh in the IIAC meet. He said the team had high expectations for this season.

“We wanted to be a step up in the conference from last year,” Osterhaus said. “We had everyone returning from last year’s varsity squad.”

Osterhaus was happy with how the team finished in the meet, in which they did improve from last season. In 2006, the Storm took home sixth place in the conference meet.

“We were pleased, especially because of the circumstances,” Osterhaus said. “Our second and third runners were injured.”

As for the regional meet, Osterhaus said they are ready to compete and do the best they can. Individually, he wants to improve on his performance at the regional meet last season, that saw him finish in 42nd place.

“As a team we would like to see if we can beat Coe,” Osterhaus said. “Individually, I’d like to qualify for nationals.”