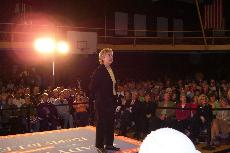 When Sen. Hillary Clinton (D-NY) stepped on to Simpson campus Saturday evening, it was not for the first time. In fact, the presidential hopeful made mention of the extreme cold snap that took place in Iowa during her 1996 visit to Simpson while campaigning for her husband’s presidency.

“I was thinking about that. As you might recall, it was the worst cold spell that Iowa had ever had, Clinton said. “I knew the people of Iowa were absolutely invincible. I’m back. It’s warmer, and I’m…. thrilled to be back at Simpson.”

Clinton also gave credit to the people of the state, applauding the serious nature at which they take the caucus process.

“It puts a lot of responsibility on people in Iowa,” Clinton said. “You have the whole country, the whole world, watching. I think people in Iowa always take this caucus seriously. It is my impression, and I have been here quite a bit in the past 10 months. that…I think there is a seriousness, and an intensity about this election…people know we have to change our country.”

During her speech in Hopper Gym, the self-proclaimed 35-year civil activist outlined four big goals, including restoring America’s leadership around the world, rebuilding a strong middle class, reforming the government and “reclaiming the future for our children.”

Proclaiming that “the era of power diplomacy is over,” Clinton made promises of immediate troop withdrawal from Iraq and mentioned the misaligned interests regarding off-shore development.

“Thirty-five years ago… I did not believe that I would live to see a president who would care more about giving no-bid contracts to Haliburton than health care to children,” Clinton said.

A topic Clinton has focused on for much of her campaign thus far, the senator spoke of a plan for health care which would allow those satisified with their privatized care to retain their plans, open up the Senate health care system to the uninsured and make preventative care a required area of coverage for insurance companies.

Emphasizing plans to restore power to the middle class, Clinton made mention of a “trap door economy” a system Clinton explained, left many Americans “one pink slip away” from poverty.

Tying in her strong visions for a greener America, Clinton noted the economic opportunities in renewable fuels, making mention of the many plants already in existence across Iowa.

Clinton emphasized plans for restructuring the American education system, beginning with a plan for universal free kindergarten. Addressing the crowd of mostly college students and educators, Clinton referenced the ways in which the current financial aid system falls short.

“I want to end the financial aid application process. It is dozens and hundreds of pages that make no sense, that nobody understands… let’s end it,” Clinton said.

Clinton’s emphasis on aiding the college-aged crowd did not surprise many. President John Byrd, in attendance at Sunday’s event, did not believe the comments were unpredictable.

“I would expect that all the candidates are going to be talking about education basically throughout the continuum, pre kindergarten all the way through higher education,” Byrd said. “Its very much an issue in America today.”

Some Simpson students present at the event saw a different Hillary than what has presently been the trend.

“She came off very mothering, very caring, a lot more caring than what I have seen in media,” senior Andy Lesieur said. “She’s always very stoic, but here, I could really sense a passion about her.”

Part of that passion may have been a plea to both the Simpson and community and the state of Iowa.

“I’m not running because I’m a woman, I’m running because I think I am the best qualified person to hit the ground running…but I can’t do it without your help,” Clinton said. “I need you to sign up for me to caucus for me two months from tonight.”