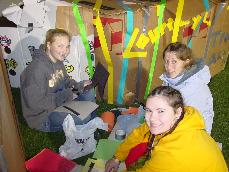 Have you ever wondered what it’s like to be homeless? Or how about the feeling of sleeping in a box, trying to stay warm on cold winter nights? For many people, this is something that is hard to imagine and something that many would rather not think about.

Last Friday night, a group of Simpson students, lead by Admissions Counselor Tiffany Hummel, participated in the second year of the event known as Reggie’s Sleepout. The event was held at the Drake University Stadium in Des Moines.

The event was named after a man named Reggie Kelsey, who had grown up on foster care throughout his entire life, according to the web site reggiessleepout.org. Three months after he grew out of foster care system, Kelsey died after falling into the Des Moines River.

To prevent another tragedy like that from happening, the Iowa Aftercare Services Network was formed with the assistance of the Iowa Homeless Youth Center. The organization provides services for adults who have gotten too old for foster care.

“Iowa Homeless Youth Center staff work directly with homeless and near homeless teens to help them complete middle or high school, apply for and keep a job, learn how to do things like cook a simple meal, do laundry, and manage money,” event chair Mary Oliver said in a statement on the Reggie’s Sleepout web site. “Seven days a week, IHYC has a van on the streets reaching out to homeless teens offering subsistence food and hygiene packets.”

Reggie’s Sleepout began last year, and when Hummel heard about it, she believed it would be a good opportunity for students.

“I formed the team last year and I thought it would be nice to have Simpson represented,” Hummel said.

To raise money, participants are asked to find people to donate to the cause.

“We set up our own personal site,” Hummel said. “People then ask friends and family for money.”

This year, 27 people attended the event, an improvement from last year when only six people attended. This made the “Simpson Storm Sleepers” the team with the greatest attendance.

To spread the word, Hummel used the Internet to find people who wanted to participate in the event.

“I sent out an email to the entire campus and I created a Facebook event,” Hummel said.

Freshman Colleen Johnson was one of the participants in the event.

“Tiffany invited me over Facebook and provided a link,” Johnson said. “It looked like a good cause to be a part of.”

Professor of Sociology Rachel Bandy and Professor of History Rebecca Livingstone offered credit to students in their classes who attended the event in an attempt to get more students to participate.

Simpson’s Physical Plant staff provided boxes for students and staff to sleep in. Among the other events at Reggie’s Sleepout was a box-decorating contest in which all 800 participants could compete in.

According to the web site, other contests included the top individual fundraiser and the top team fundraiser. The prize for the winners was a 42″ flat panel television.

For those who didn’t want to sleep in a box, pup tents and sleeping bags were also options for participants.

According to the Web site, over 1,000 were involved with the event. As of Tuesday, a counter on the Web site listed the total donations from this year at $80,729.

The participants of Reggie’s Sleepout were excited to be a part of it.

“There’s supposed to be a lot of fun and games,” Johnson said. “And I’m looking forward to sleeping in a box.”

Hummel believes the cause Reggie’s Sleepout supports is a very important one.

“It’s an opportunity for me, in just one night, to support causes I’m really passionate about – poverty and domestic violence–which are two common reasons why people become homeless,” Hummel said. “There are too many misconceptions made about the homeless and we must remember they are also human beings who should not have prejudgments made without knowing their history.”

Hummel believes that support of these causes can help in changing our society.

“I believe that if our country can help combat the national crisis of homeless youth and families, it can also help decrease high school dropout rates, teen pregnancy, substance abuse, gang violence and more,” Hummel said. “We can’t sit around and wait for our government to make a difference, we also have to be active participants in change. After all, these are our neighbors.”