Turner’s impact felt on and off the court 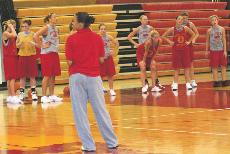 Catherria Turner, Simpson’s new assistant women’s basketball coach and minority recruiter, may have only been here at Simpson a few months, but she’s wasted no time in becoming an active member of the staff.

Turner has already started her work as a minority recruiter by going to functions in Minneapolis and Omaha.

“As of right now, what I do is go out to college fairs to recruit and talk to minorities about coming here,” Turner said. “I also have an emphasis on athletics, so I’m recruiting for any sport I can get my hands on.”

Turner has also made a good early impression on the players that she’s coaching on the women’s basketball team, where she will be working primarily with the perimeter players.

“We were very excited to have her join or program,” senior Katelyn Whiton said. “We knew that she was a successful player and we were excited that she was able to join our program. Before the season started she took the time to get to know everyone so she could do her job even better.”

The excitement of having Turner on the staff isn’t just a big deal for the Storm players, it’s also a big deal for Brian Niemuth, head women’s basketball coach.

“We are very excited to have her here,” Niemuth said. “As far as basketball goes, she’s very energetic, which I think relates well to the players. She has great experience having played at Oklahoma State. For our program I think she’s brought a lot of energy.”

Turner is a 2005 graduate of Oklahoma State University, where she played college basketball. Turner says she hopes to one day become a head coach, and is very excited to work with Niemuth.

“To get the opportunity to be an assistant coach under Coach Niemuth is just awesome,” Turner said

Niemuth said that her ability to learn is something that will help her help the team even more in the future.

“She is a quick learner,” Niemuth said. “Once she gets the learning part down, she’ll be able to help our program even more.”

Niemuth said that, although she knows the ins and outs of the game of basketball, he sees her ability to recruit as an even bigger strength.

“As far as recruiting goes, I think she can help both the basketball program and the school,” Niemuth said. “She knows the ‘X’s’ and ‘O’s’ of basketball, but I see recruiting as being her biggest gift to the college.”

Whiton said it’s her coaching ability that’s going to be one her biggest contributions to the program.

“When she is at practice she is always encouraging players,” Whiton said. “She’s giving us direction, telling us what we are doing right or wrong. I think she will also be a big help because she wants to be with our program for more than one year. I think everyone is excited about that.”

Turner says that when it came time to decide whether or not this job was for her, she turned to her family for advice.

“I’m somebody that likes to get a lot of advice when I’m making a big decision,” Turner said. “I spoke to my family and they just pointed out different aspects that I might not have looked at.”

As for her aspirations of one day becoming a head coach, she feels like Simpson is a good place to hone her coaching skills.

“I knew I wanted to be a coach,” Turner said. “I felt like this was a good place for me to learn.”