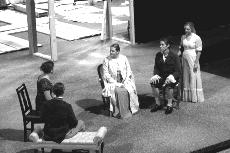 On Nov. 16, 17 and 18, the Theatre Department will be putting on the play “Pride and Prejudice.” The performances will be held in Pote Theatre in the Blank Performing Arts Center and are free for all Simpson students and faculty. The performances on Friday and Saturday night will be at 7:30 p.m. and at 1 p.m. on Sunday. The play is based off the book written by Jane Austen.

“There are people who have dedicated their entire lives to the study of Jane Austen and many list ‘Pride and Prejudice’ as their favorite,” Ann Woldt, assistant professor of theatre and director of the play, said. “The adaptation I have chosen uses as much of Jane Austen’s original text as possible, while keeping it within a theatrical time frame.”

There are 15 students acting in the play with many others working behind the scenes. The two main parts of Elizabeth Bennet and Mr. Darcy are played by senior Shelley Hagerty and sophomore Kyle Bochart. Freshman Brandon Hebert also joins the cast as George Wickham.

“Elizabeth is very smart and witty, but we learn that she is also very vulnerable,” Hagerty said. “She is always trying to get in the last laugh and in return also likes to confront people when she feels it is necessary to do so.”

Elizabeth has four sisters, Jane, Mary, Kitty and Lydia who are played by freshman Emily Ledger and Erin Tracy and juniors Candace Zak and Kayla Dvorak. While most of the daughters end up married by the end of the play, that’s not to say they are all happy marriages.

“Lydia ends up married to Wickham but, even though she thinks it’s a happy marriage, it’s not good at all,” Herbert said.

Some cast members find difficulty in playing a counter personality. The role of Mr. Darcy is one of those.

“Mr. Darcy comes off as really arrogant and snooty, but in reality he’s just very shy,” Bochart said. “I have a hard time playing him as arrogant, prideful and snooty because I’m a very happy and modest person. He is a wealthy, traditional man who is hard to crack but he was a delightful challenge to play.”

“Mr. Darcy’s father likes me better then him and my character tried marrying Mr. Darcy’s sister just for all their money,” Hebert said. “I got caught but then started to get acquainted with the Bennet family and that’s when I started being interested in Elizabeth. Mrs. Bennet wants all of her daughters to be married to wealthy men but her daughters want to find love on their own.”

The theme and meaning of the play is in agreement by Herbert, Hagerty and Woldt in that it’s about love. Woldt believes it’s not only about love, but about the social and familial expectations versus love and freedom. Hagerty believes the play is a lot about being yourself and that it shows a world in which marriage is of convenience and circumstance and actually marrying for love is very unusual.