Future of Cornerstone I debated at recent Gabfest 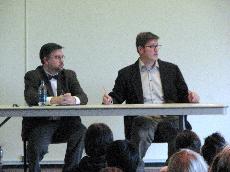 Two Simpson professors faced off over the future of Cornerstone I during Simpson’s Gabfest, held on Thursday, Nov. 1.

Nick Proctor, associate professor of history, argued that Cornerstone I, which is a two-part sequence involving the Western tradition, should be completely removed.

“The Cornerstone one sequence is a relic of the early 20th century,” Proctor said. “The Cornerstone one course is an anchor on the first-year experience. It’s problematic especially for science majors – its sort of there as a lump preventing people from taking more interesting classes. And to clarify my point, it’s not that Cornerstone one should be replaced by something but that in fact, be utterly annihilated.”

Mark Gammon, assistant professor of religion, countered Proctor’s argument by stating that the Western tradition is an important foundation for our society.

“Thinking about divorcing ourselves from the wisdom of centuries is ridiculous,” Gammon said. “We’re in danger not of redefining liberal arts but of obliterating it altogether. The Western tradition is just that, a tradition. It’s not a musty, stagnant thing, but a dynamic, living conversation carried on through the ages about the questions that constitute human life and community.”

Proctor stated that one of the reasons behind getting rid of Cornerstone I is that it is boring and serves no real purpose for students.

“For me, ideas like honor, beauty, truth, friendship, war, and death seem interesting, but when I lecture about these issues, half the people seem bored to tears and I really want to spare them the discomfort,” Proctor said.

However, Gammon feels strongly that Western tradition is an important asset to students’ education.

“We could argue that it’s boring, certainly, we could say that it’s a waste of time, but why bother paying for a liberal arts education when what we would be is a glorified trade school,” Gammon said. “What about the whole idea to take students and make the ideas come alive to them so that they might be creators of culture and not just consumers of it?”

Proctor argued that by focusing exclusively on the Western tradition, non-western cultures are being neglected, which are increasingly becoming more important.

“Western civilization is ethnocentric,” Proctor said. “There are no texts in the western tradition sequence from East Asia, South Asia, South-Saharan Africa, or from the Native American perspectives … I want students to have a 21st century education. Europe is no longer the center of the world – Asia is increasingly important, as are other continents, which are actually not represented in our catalogue. Most students graduate from Simpson without ever having opened a book about China or Japan, the two most dynamic cultures of the 21st century and yet they spent weeks, sometimes months, studying ancient Greece and Rome. This is simply misplaced emphasis.”

According to Proctor, the Western civilization classes are sexist don’t give and accurate picture of the great ideas of the Western tradition.

Gammon countered Proctor’s argument by saying that, although many of the Western tradition texts are indeed sexist, they are only known as sexist through the advance of the West.

“Is western civilization sexist and racist?” Gammon said. “The ability to identify oppression is itself in many ways an invention of the west. It is itself a critical tradition. Yes, it has been sexist in the past, but it also allows us to represent and identify what defines sexism. Yes, it has been racist in the past, but we know what racism is because we have the tools to think about it … You wouldn’t know what oppression was without the moral heritage of the west.”

Proctor stated that he wasn’t sure there is an actual Western tradition and that it is a construction that is far from reality.

“You don’t know where you came from unless you read the classical texts that founded Western tradition,” Crouse said. “My humanities class took literature and applied it to history, which led to more discussions that were helpful in understanding the lives and cultures of the West.”