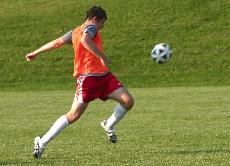 Simpson’s soccer teams seasons both finished sooner than their coaches or players would have liked.

The women’s team finished their season with a 5-9-1 overall record, going 2-5-1 in conference play. The women finished 7th in the conference this season, failing to make it to the Iowa Intercollegiate Athletic Conference tournament.

Assistant Coach Greg Velasquez feels that the women have a lot to work on for next season.

“We need to add more depth to our roster,” Velasquez said. “We suffered some big injuries this year and other players had to fight through their injuries throughout the year. Next year, we would like to add a few more players to the puzzle and we want to have people back and healthy. Once we get the rest of those pieces together we will be back in top form.”

Junior Lisa Fiene felt that the women’s win against Nebraska Wesleyan was a highlight of their season.

“We finally came together as a team during the Nebraska Wesleyan game and did the necessary things to finish the game. It was our first overtime win and it felt really good that all of our hard work was finally paying off.”

The women had lost three games in overtime earlier in the season.

According to Fiene, the team will be working hard during the off-season.

“We will be working hard with our strength and conditioning this off-season,” Fiene said. “We are going to try to work on more conditioning.”

This year the Simpson men’s soccer team finished with an overall record of 3-14-1. Their conference record was 3-5.

The men made it to the conference tournament but were defeated in the first round of the tournament on Oct. 30 by Luther College with a score of 4-0.

Sophomore Jeremy Ward made six saves for the Storm.

According to sophomore Connor Skultety, one of the highlights of the season was the trip to Washington.

“We had a lot of fun out in Washington,” Skultety said. “We got to play some great competition and it was a great bonding experience.”

The men’s team is only losing one senior, Nick Harrison.

Sophomore Corey Miller played in all 18 games for the Storm, scored three goals and had four assists.

Sophomores Josh Youngman and Jeremy Ward were the goalkeepers for the Storm. Youngman had 56 saves on goal and Ward had 67, playing 10 games each.

According to Skultety, the men are going to work hard in the off-season to try to improve their record next year and hopefully make it further in the conference tournament.