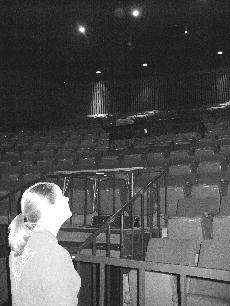 Speculation that there may be asbestos in some of the lighting structures used in Pote Theatre has raised concerns regarding asbestos’s dangers and what Simpson College will do if tests confirm the presence of the hazardous material.

In reviews of technical aspects of the theatre grounds, the possibility of asbestos has been brought to light by virtue of the unlikelihood that other materials, commonly used in the components of stage lighting, are present in Pote Theatre.

“Lighting fixtures historically have been insulated, in the wiring, with one of three materials,” Steve McLean, technical director of Theatre Simpson, said. “The first material was asbestos, the second is a fiberglass replacement, and the third is rubber. Since these cables aren’t insulated with rubber or fiberglass, you can conclude that it’s asbestos.”

Asbestos, as a substance for insulation, has been historically popular due to its ability to withstand heat and electricity. It was in commonly used in infrastructure until the mid 20th-century, when popular opinion was turned against it due to its widespread reputation of causing skin irritation and severe lung problems.

In antiquity, asbestos was viewed as a miraculous substance for its heat-resistant properties. It was employed not only as a natural insulation, but also as a flame retardant in fabrics used for everything from tablecloths to garments.

Asbestos, a carcinogen, was not outlawed in the United States until 1978. Therefore, the presence of asbestos as an insulator in buildings built before 1978 is highly possible

It is not suspected that the theatre was insulated with asbestos, but that the lighting structures that may contain the substance were brought into the theatre from previous use in an older building.

Even if asbestos is the substance of concern in Pote Theatre, its presence alone may not be a health risk.

“The building is monitored for airborne asbestos,” McLean said. “It has always received a clean bill of health.

Asbestos does not pose a risk of becoming airborne unless it becomes what is termed “friable,” a state in which the asbestos is deteriorating into free-floating particles. Airborne fibers of asbestos are invisible to the naked human eye. In this state, asbestos is most likely to present a risk of lung damage.

McLean went on to say that the theatre possesses a significant inventory of lighting that is likely to contain the asbestos insulation, and that, in the future, this equipment is likely to be used considering the theatre’s limited budget to fully replace its stock of the necessary lighting.

Considering that the potential for asbestos lies only in the insulation of the wiring in the theatre’s lighting equipment, the equipment itself is unlikely to require full replacement.

“I don’t think that replacing these cords is a very big deal,” said Jim Thorius, vice president for student development. “As appropriate, we would replace these cords. I think that these are pretty minor kinds of things to replace.”

For theatre students actively working in Pote and with its equipment, the presence of asbestos in any form could raise concerns by virtue of its stigma, if not for its biological threat.

“I have worked a little with the lighting instruments and haven’t had any injuries or significant negative effects from them,” sophomore Kyle Bochart said. “If they are found to have asbestos, I will of course be concerned, but, if it’s a minute amount, I don’t think it’s anything to throw up a red flag over.”