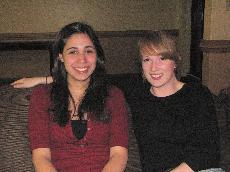 This year, a total of 15 international exchange students are on campus at Simpson College. The campus also has several language assistants, and a student teaching in the Spanish, German and French departments.

Walter Lain, assistant dean for multicultural and international affairs, hopes that Simpson will continue to get more international students.

“[International affairs is] trying to increase the numbers,” Lain said.

The international students have their own campus organization, the International Student Organization, which is designed to be a social group. ISO organizes social events and arranges trips to keep the students busy during breaks.

Surprisingly, many international students come from countries where their colleges do not have the “campus life” common in the United States.

Conor O’Neill, an exchange student from Ireland, came from Queen’s University Belfast in Northern Ireland where campus life was something that he had ever encountered before.

“My university back home is spread throughout the city with different faculties in extremely random places that may require a 20-minute plus walk,” O’Neill said. “I like the close-style community feel. As well as this, I have never shared a room before. It is certainly different, but good fun at the same time.

O’Neill also enjoys the small classroom atmosphere that can be found at Simpson.

“You are not simply a number in a lecture hall full of people,” O’Neill said. “In classes, your input is appreciated and you count.”

“Everything is accessible, everyone knows you,” Schwagerus said.

In Germany, Schwagerus said campus life is a foreign concept. Instead, students commute to school every day.

Another cultural difference greatly surprised Shwagerus. In Germany, food portions are much smaller than in the U.S.

Schwagerus isn’t the only international exchange student who was a little shocked by the differences in American eating habits.

“The food [in America] is so fattening,” Rigo said.

In Argentina, Rigo notes they are always sure to sit down and take the time to enjoy their meals each day.

Rigo also feels that her culture has much closer relationships.

“Here, everyone is so distant,” Rigo said. “Back home I would have kissed you when I met you.”