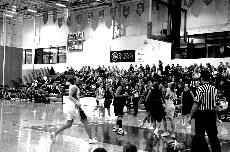 Although the men’s and women’s basketball teams have contrasting records, 4-10 and 13-1 respectively, both teams have a similar outlook for the rest of the season; take it one game at a time.

The men have gone through some growing pains the past few weeks. A four-point loss to conference foe Dubuque on Jan. 12 gave the men their fifth straight loss.

Bruce Wilson, head men’s basketball coach, talked about the rough first half of the season, and how they need to get focused down the stretch in order to make into the Iowa Intercollegiate Athletic Conference tournament.

“We’ve got ourselves in kind of a bad spot right now,” Wilson said. “But over the 20-some years that I’ve been here we’ve always seemed to play our best basketball in late January and February. We want to make sure that we’re in that top six so we get a chance to play in the conference tournament. To me, that’s one thing we should be getting ourselves cued into, and you have to do that by playing one game at a time.”

Brian Niemuth, head women’s basketball coach, emphasized the same mantra, saying that, although they’re playing well right now, that doesn’t mean they can afford to look past any opponents on their schedule.

“You never know, anybody can win on a given night,” Niemuth said. “So we need to not focus on the end of the year, but just focus on our next opponent.”

Both coaches talked at length about things that their teams are doing well, as well as characteristics they need to focus on improving down the stretch. Niemuth also mentioned the women’s team needs to learn how to finish off opponents once they get a lead.

Wilson talks about the team gaining experience and how it will help them as the season moves on.

“The more experiences you go through, the more the guys on the team and me as a coach figure out what we’re able to do and what we need to work on,” Wilson said.

Junior guard Matt Gilbert talked about the importance of focusing on one game at a time, and capitalizing on opportunities to improve.

“Each game is key,” Gilbert said. “We can’t look past anybody. We need to take each game as a chance to improve our record and improve our self as a team.”

Other Storm players seem to share similar views as their coaches as far as how their season is going and what they need to do to be successful towards the end of the end of the season.

“We have some young guys that are coming in and really stepping up and playing hard,” Gilbert said. “As they learn and develop in this system, they’re going to become better and really be able to help this program.”

Senior Katelyn Whiton knows how excited all the members of the team are about the season they’ve had so far, but that they are also excited about the possibilities that lie in front of them the next few weeks.

“We are only half way through so we have a lot of games left, and I think that everyone is just excited about all of the possibilities that we can achieve over the next two months,” Whiton said. “Our focus now will be to go out every night and play hard and have fun.”